Who's Peeking Out Here? 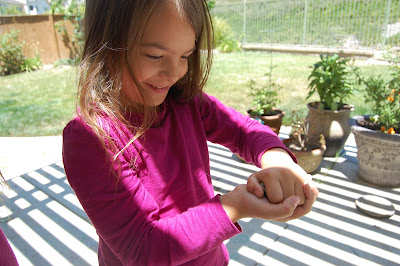 I feel like I've been away from my blog forever and I have missed sharing our days. My sister and her family just left for Colorado last night so I have lots of fun posts to catch up on. But I wanted to share some of the wildlife ~ and not so *wild* life that we've experienced over the past few days. 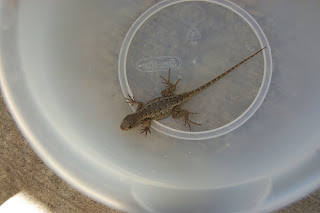 Lizards are in abundance in Southern Cal and the girls and I have been having fun catching some of them to study a bit before releasing them back where we found them. 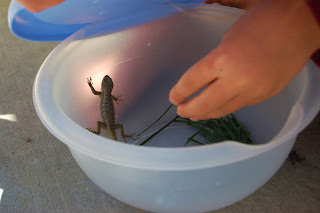 This little female is a western fence lizard, also called "swifts" or "bluebellies". The males have much darker blue marking on their underbellies than the females. Isn't she gorgeous! 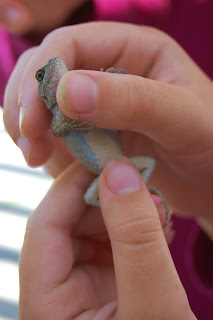 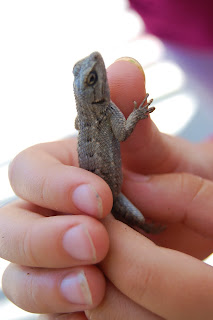 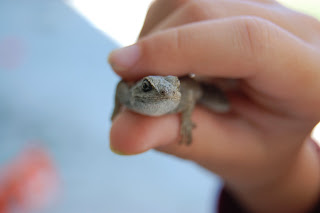 When Charley was holding her, she jumped out of her hands and started climbing on her back and up in her hair! She was so light and swift that Charley didn't even feel it and couldn't find her, until I picked her up and placed her on her shoulder. Look at the joy on Char's face! 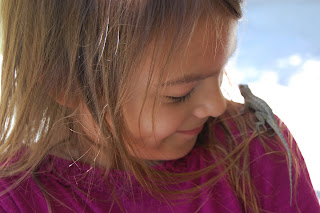 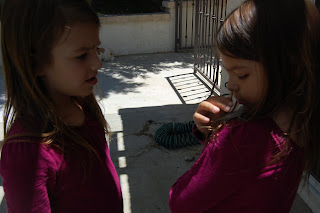 One last shot of her beautiful blue belly... 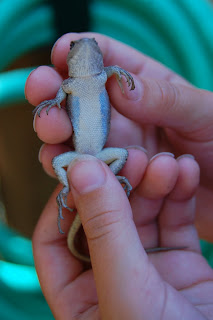 Now this was a larger one we trapped under our bucket, but it was too fast for us (don't want any tail injuries) so we just enjoyed watching it run up the stucco on our house. 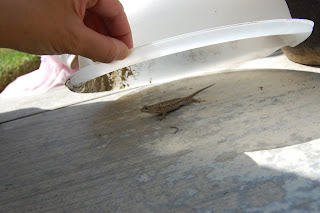 And speaking of tail injuries - this poor lizard had lost its tail (click on the picture to see how it is regenerating), so we just watched it a while. I am not sure what type it is, but the orange feet made it appear similar to a California Alligator Lizard. I did not handle it, so it was harder to type ~ not to mention I'm a complete novice! Lizards use their tails as a decoy to escape and the tails are easily broken if pulled or pushed up against a hard surface, so it's important to be very careful when trying to capture one. If the tail breaks off, it spasms, which is quite graphic and gross and I think could be very upsetting to sensitive children. I found this video of a tail that was severed accidentally. It is graphic, but can be seen here. 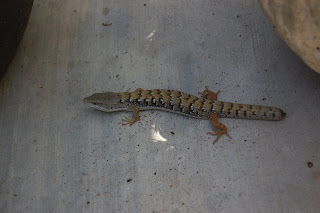 You can also see some information on the California Alligator Lizard, including stock photos of the dropped tail here (near the middle of the page). 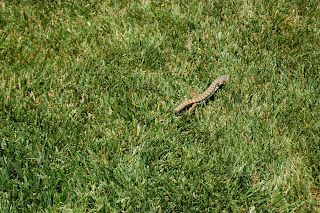 He scurried across our yard for cover under some bushes. 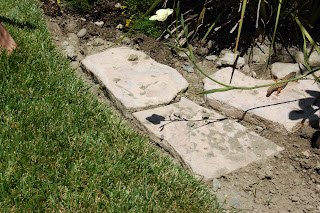 And this cutie is the smallest Praying Mantis I have ever seen. He was so adorable and tiny that I had a hard time photographing him without a macro lens. 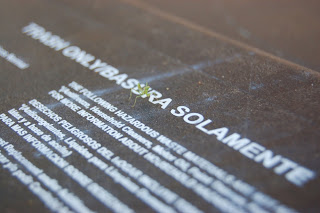 You can get an idea, though, of his size in comparison to the letters on our garbage can! I'm hoping he grows big and strong and sets to work on some of our dreaded black widow spiders! 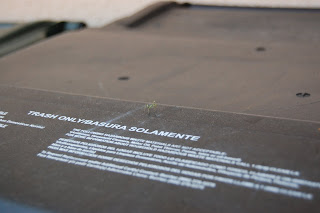 Speaking of spiders, the girls and Tony spent about 30 minutes just sitting and watching a flawless orb web being constructed.

This is "Sally". I think she was a Zygiella x-notata.

And hidden in the bush next to her was this bruiser...

I think this is a Funnel Web Spider. 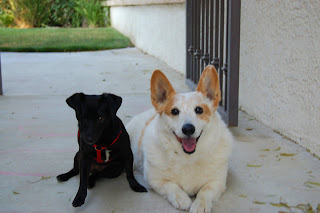 And on the "not-so-wild side", these two canine cuties are bonding and playing together just beautifully! 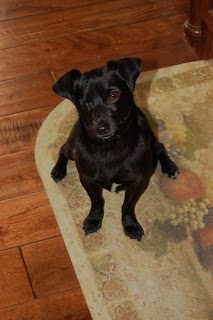 Our one-eyed captain is a total love!
I missed yesterday's book review, but will be sure to continue that this coming Friday and hope to post some of the fun things we did on our vacation with some of the cousins this week!
Posted by Jen at 7:43 AM