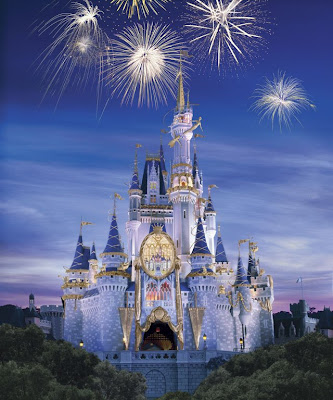 Well I apologize for the delay in posting. We have just recovered from a horrid stomach flu that actually commenced the night we returned from our two day Disneyland trip with the cousins. It was a doozie - "C" didn't even get out of her bed, vomiting right there and inching to the side to continue her slumber. "E" came to get me in the middle of the night and the room smelled suspicious, but I laid down next to them and 20 minutes later, discovered what really was going on - ugh! Anyway, the bug made its way through all of us and my poor little "E" took 4 days of vomiting before we had to get some medication to help her stop throwing up. Needless to say, I was a little concerned. Well last night, she finally ate something after losing 5 pounds in 4 days. Well today, I am surrounded by the joyous sounds of laughter and giggles and the girls are exploding with happiness in being reunited as playmates again! So I have a moment to get caught up...

So back to Disneyland. I guess you either love it or you hate it. There really doesn't seem to be a middle of the road with this one. I grew up with Disneyland and I admit, I am on the "love it" side. My girls aren't overly materialistic and their heads have been filled with all kinds of great books and fairy tales so I haven't noticed any real negative effect from attending the park or even buying some of the Disney stuffed animals and cheap plastic toys (that fall apart the minute you start playing with them - no joke). The girls have seen many a Disney film - some I've regretted, especially when the nightmares started, but I am on a journey, too and I have learned so much along the way. Note to self: A book of Grimm's fairy tales - OK, Disney films - nightmares...but still, we do love the park.

So to get caught up and back on track with our schooling, I'm going to post a bunch of shots from our trip and then move on with our normal lives.

We really had so much fun with the "G" cousins.

First we met up with them for a bite to eat. The girls went in with Grandfather and Tony & I followed after them once we parked the car. After lunch, we headed over to the Matterhorn...

"E" was very excited to ride Matterhorn with Grandfather. This is her favorite ride and she loves when he tickles her along the way! Cousin "M" and "C" rode just about every other ride together. "M" is one year older and the girls adore her.

Sweet success! Here is Grandfather with "E" and my brother and his youngest. Afterwards, "E" and cousin "M" shared a nice walk to the next ride.

We hit one of our favorite rides, Peter Pan's Flight. The line for this ride is always long, but the ride is so sweet and I am a huge fan of JM Barrie. 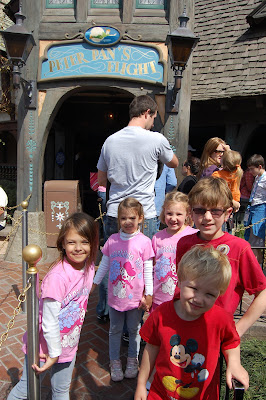 After that, we hit Tony's favorite ride, "Mr Toad's Wild Ride", again "The Wind in the Willows" is fabulous and this ride was really fun after we read a good chunk of the book to the girls last year. We realized the language, though beautiful, was just a bit too advanced, so we put it off a year and will try again this year sometime.

Here are the kids in the car out front of the ride and here is my brother and hubby Tony, sharing some laughs and holding the "diaper" bag :)

Tony then took 4 of the kids on the teacups. "E" is my sensitive baby and she can get overstimulated, so she opted out for a quiet moment to regroup. Later, we went through "Tarzan's Treehouse", again last year, we enjoyed an audio version of the unabridged classic by Rudyard Kipling "The Jungle Book" read by the great Jim Weiss. I'd highly recommend any of his read alouds. He does have one of "The Wind in the Willows", as well..here's a link to his company, Greathall Productions:
http://www.greathall.com/

And one of my favorite shots: Grandfather and five of his grandchildren enjoying ice cream at the park. Can you figure out which one is the adult? 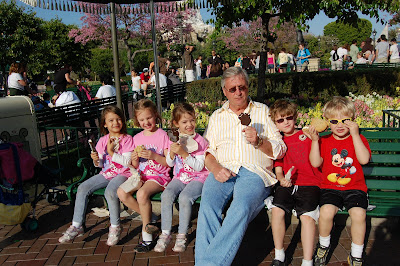 We left the park and headed across the walkway to California Adventure, where we enjoyed the Toy Story Ride, which is 3-D and like a carnival game where you shoot the target. Here we are dorking it up for a shot, followed by cousin "M" and "C" having a blast!

That was the end of Day 1...we spent the night at Paradise Pier Hotel, one of the three in the Disneyland chain. It was the last couple of days of "off season", so the rates were reasonable. The next morning, we headed over to hook up with the cousins, who are much earlier risers than we are! 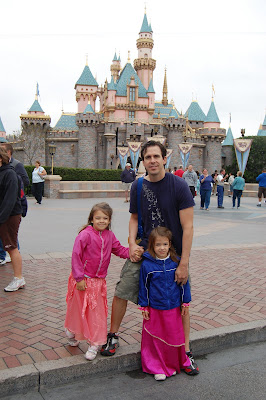 We picked up cousin "M" and went to ride "Space Mountain" with our three brave space travelers. It was a bit too rough/fast for my two, but cousin "M" loved it! 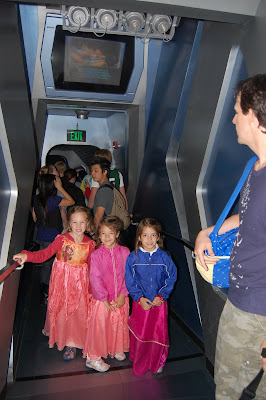 And then we met up with everyone else. "E" was so proud of herself for trying to plant a bit of a tree flower in her plastic Disney straw. 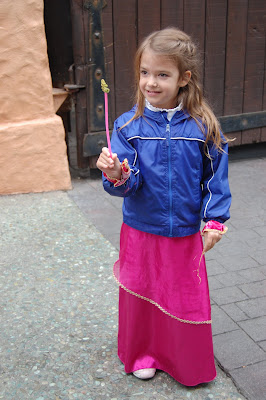 Cute shot of the cousins with Grandfather in front of Pinocchio's restaurant. 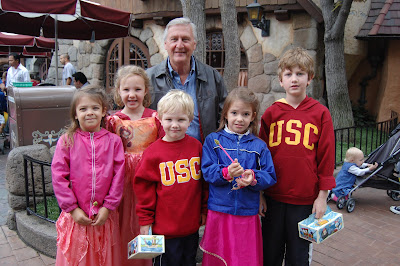 And we were so excited that we ran into "Chip" and "Dale", who were the first Disney characters the girls ever met at their first trip just before they turned 2. 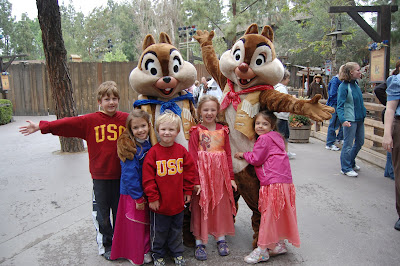 There is a small petting zoo area inside the park with goats, a big sheep, a cow, a donkey (can't pet him) and a turkey. The girls love animals so we spent quite a bit of time with the goats.

Of course, everyone wanted to go on "Splash Mountain", so here goes the first boat...

OK, this is really embarrassing, but I had to put it on here. That 50 foot drop is really terrifying! Yikes! And please don't look for the patch of gray in my hair - time to hit the bottle again... ;P
At last, the sweet reward of MORE Mickey Mouse ears ice cream and a visit with Mator and Lighting McQueen...

After that point, Tony ran the cameras back to the car to lighten our load and the fun really began :)

Did you know that you can register your birthday at the Disneyland site and then get in FREE on your birthday? If you have an annual pass already, they will give you gift certificates to spend in the park for the amount of a ticket...Not bad...

Here's the link: http://disneyparks.disney.go.com/disneyparks/en_US/WhatWillYouCelebrate/disneyland/index?name=CelebrationsDLRFreeOnYourBirthdayPage
Posted by Jen at 4:47 PM