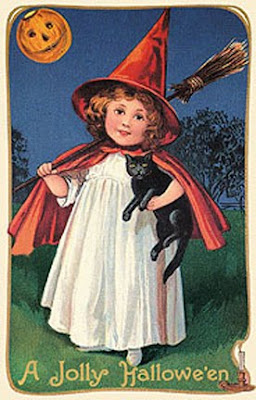 "A witch once went for a ride on her broom
Up through the frosty sky.
She zoomed and zoomed, and she dipped and zipped,
And she winked at the moon as she passed by,
at the moon in the frosty sky.
She wore a hat that was pointed tall,
And a cape that was flowing wide,
And a fierce black cat with a stand up tail
Rode merrily by her side,
Rode merrily by her side."
~ from Wynstone's "Autumn" book
Halloween came and went quickly this year, but we enjoyed changing up our tradition and drove 5 hours north to the East Bay area to celebrate Halloween with the girls paternal grandparents. We were still not 100% after what we believe to have been the swine flu, but had as much fun as we possibly could!
Grandma is a wonderful seamstress and is an artist so she is quite fun and theatrical. I was thinking the night of Halloween, as I lay in my bed, how blessed I am to have her in my children's lives. This is no ordinary grandma....no, this grandma has gone down a baby pool slide on her tummy, fully clothed...this grandma made up a deer game with the twins in which she captures them with her car net and they try to break free and chase her...this grandma will go on every single scary roller coaster (first in line) and laugh the whole way down...this grandma has more energy than most young mothers I know and she has a heart even bigger than all her other gifts.
This grandma loves our animals and surprised us by making a "Wizard" costume for our corgi, Farley...
He was to be her companion (or perhaps her minion) :D
When we pulled up at 3pm on Halloween, we couldn't find Grandma K, but we instead found this scary, old fashioned witch! With "Wizard"!

After hugs and kisses and putting our things away (including our four rats as she insisted we bring them, as well), the girls got changed. Grandma had made bat wings last year for the girls to wear for Halloween after they fell in love with the Stellaluna book and character. We went through just about every bat story for children after that one - lol!
Well, Elena decided she wanted to wear three costumes - the first of which was Mulan, so she got dressed in that, while Charley insisted on being a bat again. We took a few pictures...and then went inside to carve pumpkins - yeah Grandma! She thinks of everything :D (we hadn't carved them due to the swine flu illness)...

Well after carving pumpkins, Elena wanted to change into her bat costume and there she stayed! Here is an expressive shot of the two pet bats and the scary witch! Where's Wizard?!?!

Then some fun shots of the girls "flying"...

And one house in the neighborhood was elaborately decorated, so we took a few shots there...the girls weren't frightened at all. They seemed more scared by houses that played ominous music with hardly any decorations (at least Charley was more frightened), but they had no trouble with these horrific scenes and slept soundly all night long.

When we got back home, the girls dumped out their stash and we adults ate wayyyyyy too much of the candy. Luckily the girls haven't had a lot of sweets and consequently, don't find them that tasty. So daddy will be taking the candy to work so Mommy doesn't get tempted!

Hope you had a marvelous Halloween! 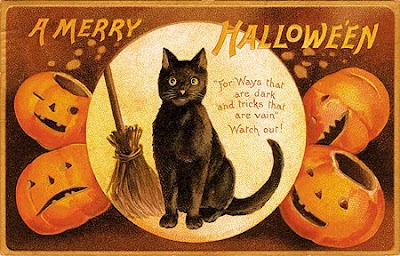