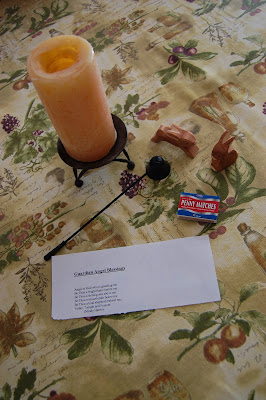 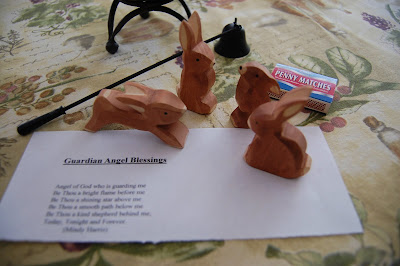 We gathered around the table joyfully to start Grade 2 & actually started it earlier than I had planned, simply because the girls were begging to start up again. They were eager to return to school, which made me very happy, of course :D They had been playing a lot with these retired Ostheimer rabbits, as we've seen so many in the hill behind our house this summer. The girls decided the bunnies would come to school, as well!
We learned two short verses, lit our candle, said a special prayer for our school year and they each wanted to snuff the candle at the end of our prayers. We also prayed for my last remaining Grandmother, who at age 90, was soon to be admitted to hospice and pass the same day.

I decided to start this block, which is a 2 week review of form drawing with the vehicle being Chumash trickster tales, with a retelling of the original Chumash "Rainbow Bridge" legend. This is how the Chumash believed they had come into existence & I felt it was the perfect place to begin this year.
I must warn you, though, that my props and puppets were not how I originally envisioned them, but since we jumped into it a week before I was prepared to start, I grabbed what I had and we used our imagination! 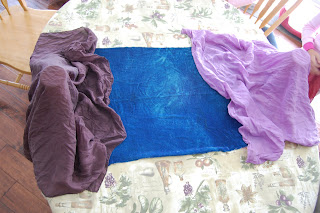 This legend can be found in several sources and different books for children. I previewed a few and decided I most preferred the version by author Audrey Wood with paintings by Robert Florczak. It is titled, "The Rainbow Bridge" and it basically tells of the earth goddess named Hutash who lived on a beautiful island called Limuw. Hutash was lonely and decided she would create people in her own image. So she climbed the highest mountain & gathered some special seeds from a sacred plant and scattering the seeds, commanded them to become people. The seeds took root and grew into plants that flowered. When the flowers opened, out stepped the people young and old (I thought this was amazingly beautiful as it is so representative of the process of birth - except for the people being all ages - lol.)
This was the beginning of the Chumash tribe. We used a pregnant needle felted maiden I had made to stand in for Hutash and the girls collection of painted peg people as the Chumash, along with our silks. The purple was the island of Lemew, where Hutash lived and the people originated and the brown was the mainland, with the blue being the water in between. 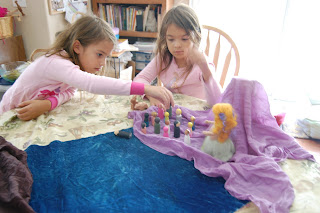 Hutash was very pleased and called for her husband, the "Great wise Sky Snake" (the Milky Way Galaxy). He came down and fell in love with the people as well, but he saw they were cold and not thriving. So he made a gift for the people, striking a lightening bolt from the sky which struck the ground and began a fire. The people were warm and could cook their food. They flourished. 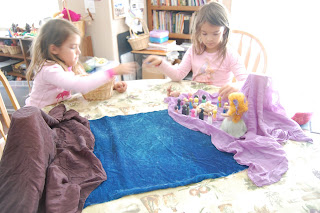 After a while, though, there were so many people that it was becoming too crowded. The people were noisy and trampling the flowers. Hutash grew sad. So she decided to send half the people over to the mainland. She created a Rainbow Bridge for them to cross over to get to the other side. 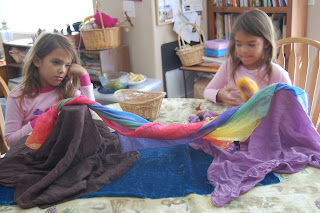 However, some of the people who were crossing on the bridge grew scared and looked down below into the ocean. They slipped and started to fall! Hutash loved her people and didn't want them to die, so she changed the fallen ones into dolphins so they would be saved. And that is why the Chumash people regard dolphins as their brothers and sisters! 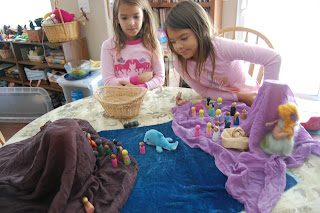 Don't ya love the dolphin stuffed animal?!? Ha! Ha!
The girls enjoyed the story and then decided to create the mainland as they know it from our many beach visits... 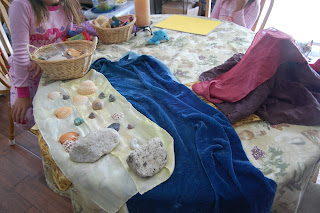 And they drew in their MLB's... 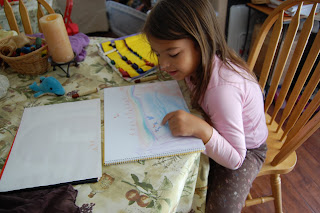 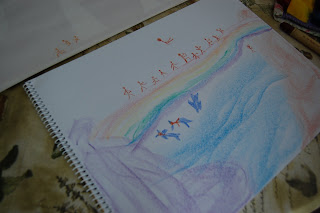 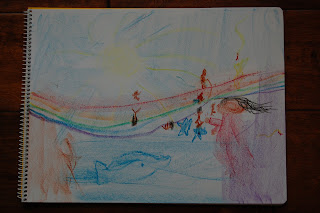 So, not a trickster tale, but an important legend/folk tale to begin this month long block (and their first actual introduction to a wonderful tribe that they will study in depth when they get older). This block will be divided between form drawing and math review. I kept it short and we did a few other fun things - sang the 'Summer Goodbye' song listed in Wynstone Press' Summer book and a few other little things, but kept our first day short and sweet!
Posted by Jen at 11:19 AM