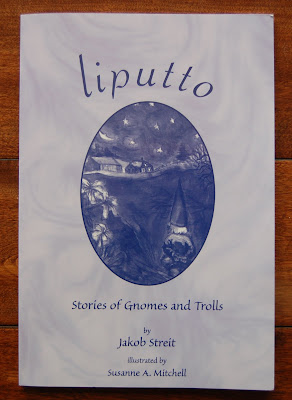 This week, we finished the story of "Liputto: Stories of Gnomes and Trolls" by Jakob Streit. Streit was a Waldorf teacher in Switzerland and wrote several magical books for children. His books have been translated from German.
"Liputto" is a story of a mountain flower-root gnome who helps the flowers to bloom by pulling sunlight down through the roots into the earth. After years of service, he earns his "roaming cap", which renders him invisible when worn so that he can explore the surface of the earth without being seen.

The book is broken up into 17 short chapters, which makes it an ideal bedtime read. It begins with four chapters on a character called the "Net Troll" who likes to capture things he sees in nature, such as butterflies, fish, frogs, etc. As a troll, he is very selfish and destructive and luckily the animals he captures are set free by friends of the forest. The Net Troll then disappears for several chapters, only to be brought back in the final few chapters as the antagonist of the story (along with another troll known as "Hook Troll").
This book is usually advised for Grade 1 children, though it is written much simpler than Streit's book "Puck the Gnome" is. To me, it seemed more appropriate for a younger audience than Puck did, but it does have some dark elements, in the vein of a typical fairytale. Liputto does get attacked by some bad trolls at one point and is healed with the help of some elves and the sap brought up from deep within the earth. Void of intense descriptions, the children were accepting of it without batting an eye. I think it is similar to fairy tale reads, in that we adults seem to struggle more with the darker elements than the children do as it speaks to them differently.
My girls thought the Net Troll was pretty silly in the beginning chapters. They weren't frightened at all by anything in the book. Their only complaint was that it just kind of ended without enough resolution. They wanted more confirmation that it ended as they had hoped.
Liputto is a loving gnome who helps all that he sees (flowers, birds, animals, and even human children who were in danger). He is entrusted with a special silver cup, given to him by a beautiful Water Fairy, which contains magical silver drops with which to heal and create goodness. The Water Fairy warns him to not let the silver cup fall into the hands of strangers as they could use it for bad things, rather than good.
Therefore, with silver cup in hand, Liputto journeys to the children and continues his adventures, helping them and spreading goodness. When he returns to gather more drops from the fairy, he discovers a crystal cavern which he is very drawn to. After filling the cup and being reminded to keep the cup safe, he returns to the crystal cavern and sets the cup down. Thereupon, it is snatched up by Net Troll and Hook Troll. Liputto is distraught.
The two trolls run wild with it and pollute an area, turning good magic into bad. Liputto must rescue the cup and bravely risks his life for it. After a good beating, he saves the cup and is restored to health thanks to a Tree Spirit and some elves. He dreams of restoring the cup back to silver and upon awakening, goes on his merry way.
The book is a mere 59 pages and has a few sepia illustrations which were illustrated by former waldorf student and artist, Susanne Alethea Mitchell.
Here are four of them... 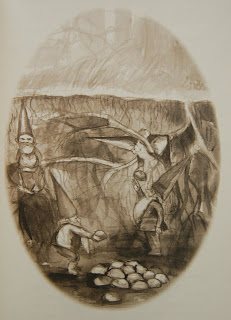 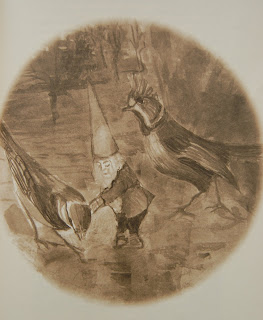 Liputto reassuring two birds that he will be able to save their baby bird who fell from its nest. 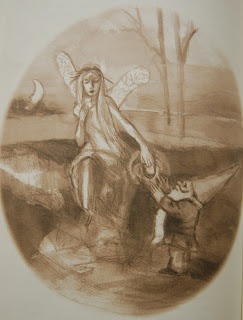 Liputto receiving the silver cup from the Water Fairy. 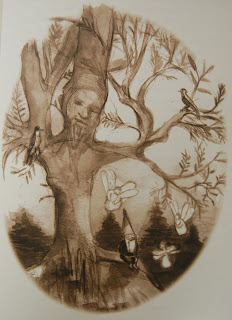 Liputto being healed by the Tree Spirit and the Elves.
Overall, this was a really nice book for Grade 1 students. We weren't quite as enchanted with it as we were with "Puck the Gnome", but we did enjoy it. I wish we had read this one before Puck and would advise that since it is much simpler and in general, would do better with a younger audience. It could also be used earlier in the Grade 1 year, though it very much is a spring story.
Liputto's chapters did build upon each other, but were not reliant upon each other as the chapters in Puck's story were - meaning the chapters didn't leave you hanging and they didn't seem to always rely on the previous one, though sometimes they did. It reminded me a bit of the Tiptoes books in the way the chapters were arranged (sometimes continuing from the previous chapter and other times beginning completely new). The ending also just kind left us hanging a bit. The girls did want more so I know they did enjoy it.
This grade (Grade 1) seems to be very into stories of gnomes - between this one, Puck the Gnome and the newer book "A Donsy of Gnomes" (we will be reviewing this one eventually, as well). The girls are delighting in the goodness of the gnomes - how they help, how they care for, how they heal. They are surely such good little forces that speak to our children in a special way.
"Liputto" was a wonderful addition to this year! We love Jakob Streit's books!
Posted by Jen at 11:08 AM