Last week, we finished up our work on vowels. The first two days, we worked on "U"...


Spring has arrived and we've been enjoying wonderful March days. Usually March can get pretty chilly in Southern Cal, but this year has been rather temperate.

Armed with our basket of nuts, sunflower seeds, Nature Stories book and sidewalk chalks, we headed outside, excitedly discussing things that begin with the letter "U" or have a "U" in them as a main vowel. We brought our yoga mats outside and practiced some stretches and deep breathing. Then someone got an idea and whispered it to her sister...in a flash, the girls were gone and returned a moment later with their umbrellas, which have seen better days - lol! What is it about kids smashing their umbrellas?!?

The girls walked the five vowel forms outside, umbrellas in tow...

Then, they practiced creating the shape of the "U" with some nUts :D

The sun warmed us up and the girls lost their jackets and hung out near our trees while I read to them "First Signs of Spring" by Margaret Peckham, from her "Nature Stories" book.
They played outside for a bit and then came in for a snack and some stories. We continued with "Sixth Sense Language", our alphabet books, and dug out a beautiful "Unicorns" book by Usborne. 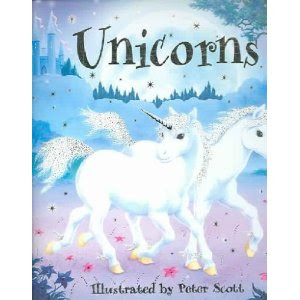 While I decided to draw an upside-down umbrella, they pleaded to draw unicorns in outline form and I caved. They've been so good about learning to shade with the block crayons, but it's so hard - really much harder than drawing outlines. But this time, I allowed it. They do get enough practice and they were so excited about drawing unicorns so I let them have at it while I read to them "The Musician" by the Brothers Grimm. (Can you spot the "bUck", "pUg", "sUn", and "skUnk" in their pictures, along with the Umbrella and Unicorns?)

The next day, I read "The Skunks and the Ovenbird's Nest" from "Among the Night People" by Clara Dillingham Pierson. We also planted our sunflower seeds in a pot - the ones we planted last year never came up : (

And as a review, following Eric Fairman in his Path of Discovery: Volume I Grade I, we took a long time to read the story of "The Two Brothers" by the Brothers Grimm. This story can be stretched out over several days or even a couple of weeks. It's very long and several tales weaved into the main story.

Tomorrow, I'll share the wrap -up and hope to cover how we are celebrating this special Holy Week! No studies, but lots of focus on some great Easter stories and more egg preparation.
Posted by Jen at 1:49 PM