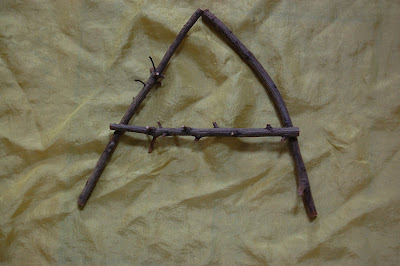 A is for Angel with heavenly wings...
This past week, we began our next Language Arts Block on vowels. From my understanding, vowels (more so even than the consonants) are to be experienced through eurythmic gestures to help engender a "soul" experience for the children. They are usually taught after the consonants as they can all form more than one sound, making them a bit more rounded and complicated.
You can read Steiner's Lecture on the Alphabet here. This is a recap of what we've been working on the past three days.
Keeping things in the senses and imagination, I set up some scenes for the girls in learning the sounds the letter "A" makes. They love Animals, so they grabbed their knitted rabbits to take this journey with them and gathered around the floor where I had placed a yellow sun silk over a surprise.
I again turned to the wonderful "Sixth Sense Language" ebook from Kristie Burns of Earthschooling as she has some eurythmy-inspired movement verses. I said the first one and did my movement while the girls watched and then we repeated it together, each of them moving with their little rabbits to get the feel of "A".
When we finished, they gathered around the silk and the rabbits helped them pull it off to reveal the surprise! 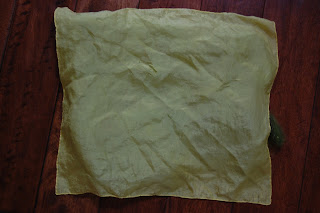 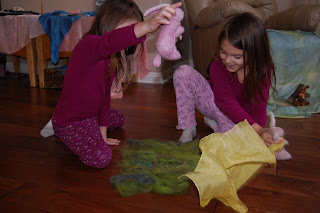 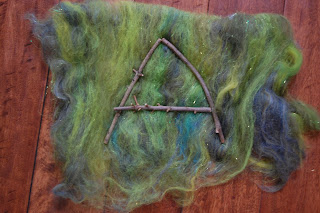 The letter "A" on my wool batting. The rabbits then walked the form :D 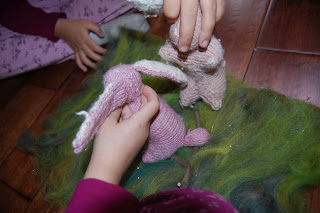 I told them the story in the "Sixth Sense Reading" book for the letter "A", which is a story about a stag who admires his big beautiful antlers while gazing in a lake. Meanwhile, he curses his spindly legs, which later save his life after his antlers get caught in the trees while running from a hunter. The girls love to use puppets and figures for stories. They really seem to get more into the stories and retain the story more easily. 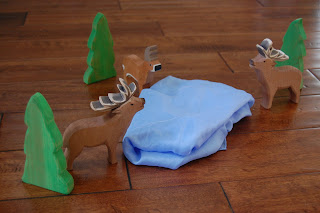 After this story, we looked at the pictures of "A" in our alphabet books, "LMNOP and All the Letters A to Z" by Howard Schrager and "Living Alphabet" by Famke Zonneveld (this book has been revised and released under a new name and includes a section in the back about language arts and how children learn it. It is now called "Waldorf Alphabet Book"). We discussed the pictures and tried to think of other words that might begin with the letter "A" or have an "A" in them with a short vowel sound (like cat, ran, stand, alligator, animal, etc)...

Later, I told them the Grimm's version of "Little Red Cap" to hear the short "A" sound. I surprised them with two new Ostheimer figures (Red Cap and the Grandmother) - hiding the Granny in the house so that when they opened the doors to let the wolf in, they ahhhhh'd with excitement! Very cute :D 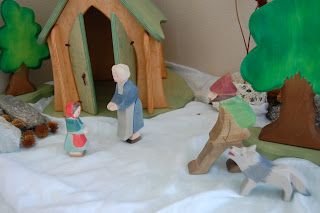 We went to the table and had a snack of apples and bananas so they could tie the "A" into their senses. 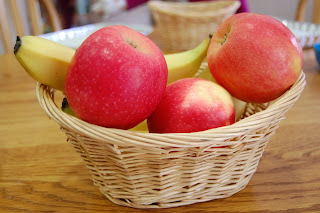 After our snack, we got out the sandscapes and wrote the letter "A" with a piece of seashell we found on our beach adventures. 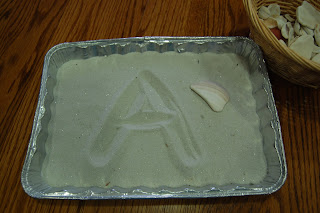 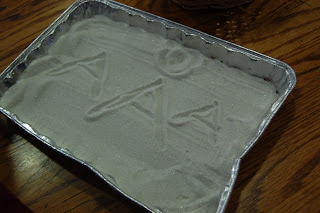 Once that was finished, the girls heard a short story from Clara Dillingham Pierson from her "Among the Meadow People" book called, "The Ant That Wore Wings". Afterwards, we drew a picture in our Main Lesson Books. The girls had their own ideas of how they wanted to draw their ants and antennas. 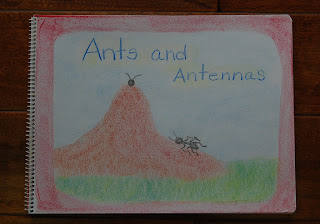 Grandfather bought the twins magnifying glasses a couple of years ago. While I am trying to hold off on using them until they are older so that there is nothing which separates them from the object of their observation, they do get them out once in a while for fun. I don't know what made Charley think of this, but she decided to draw a picture of the small ants, and then a section of how it would look under her magnifying glass (notice the hand with fingers wrapped around the handle) and then on the left, she decided to draw the inside of the ant hill and what one of the ants was thinking about! A bit cerebral, but since a very young age, she has always been an abstract thinker, no matter how much I try to balance it with age appropriate thought and activities. Elena copied Charley a bit and her picture has a hand holding the magnifying glass behind the ant hill...she is very much where she should be at this tender age.

Today, we talked about the other sounds "A" can make (like long as in Angel). We memorized the painting verse in the "Sixth Sense Language" book about "A is for Angel..."

I read to them the Grimm's Fairytale called, "Our Lady's Child" and then we went into the kitchen to do some wet on wet watercolor painting of an angel. We painted our background and then used the technique of removing color from our page to form the angel. 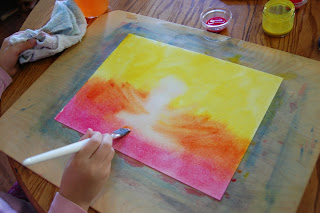 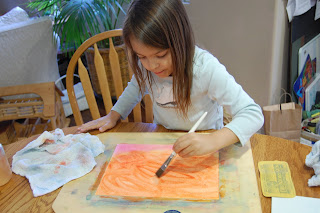 The first exercise was a lesson on following directions, so the girls watched and then tried to make their angels like mine with their own color schemes. After, they were given another piece of paper to create what they felt inside. 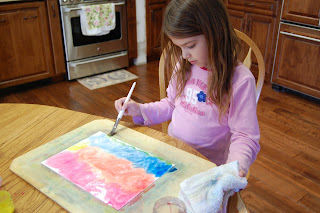 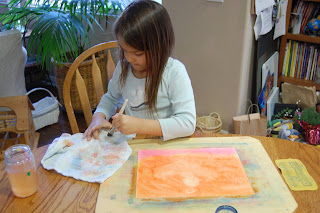 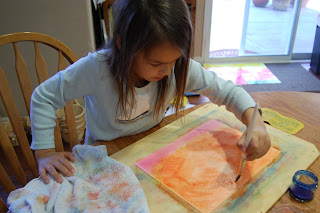 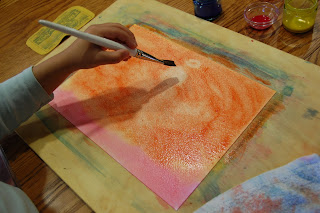 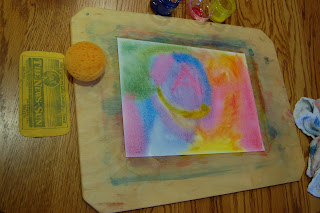 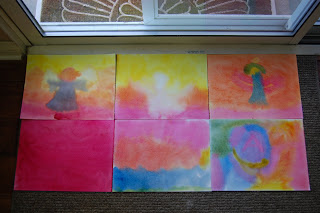 It was a fun start to the vowels. I am planning on this being a 3 week block with 2 letters learned per week. The last week, after they learn "U", we'll review and then read "The Wise Enchanter" which we haven't read yet because they hadn't learned their vowels. And then the 4th week will be a form drawing week.

Update: Another thing to possibly add (which we did on Thurs with "E") is to have the kids make a formation of the letter A out of acorns. I will show pictures in my next post! So if you are referring back to this for the Vowels Block, please check out the post on the letter "E" for a picture :D
Meanwhile, I wanted to share this "discovery" I found yesterday when I came into the family room. Not sure what inspired it, but Charley created such art using the sticks and pine cones we keep near our fireplace - what wonderful moments these are! 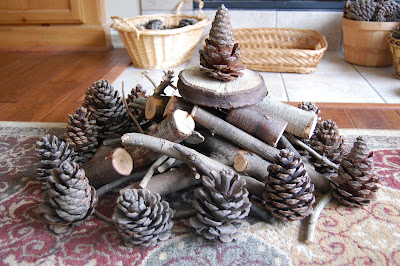