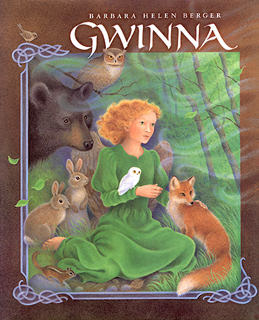 "Gwinna" by Barbara Helen Berger was our read of the week. We chose it to fit with our study of vowels, "I" and "O" ~ and that there is a griffin in the story, which was one of the Grimm's fairytales we read this week (that post, hopefully tomorrow). The name of the main character is Gwinna and it is a story about owls - perfect!

Some of you may or may not know that I am a big fan of Barbara Helen Berger and I don't quite understand why her books aren't gracing the shelves in Waldorf Bookstores - maybe they are, but I sure haven't seen them. Her name is probably familiar to some, as the author of such breathtaking picture books as

Her stories are very reverent, honoring the spirit. I think Pagans would especially appreciate them as they are very in tuned with the nature forces, though Christians will also appreciate the spirituality (The Donkey's Dream is the nativity story told through the eyes of the donkey). They are beautifully illustrated and so dreamy. She uses lots of metaphors and I love that. I had done a review last year of "Grandfather Twilight", a brief summary of "A Lot of Otters" and "When the Sun Rose" which can be found here. I found A Lot of Otters to be very AP :D

Gwinna, now out of print, is her longest book - a chapter book with 16 chapters. It is a story of a husband and wife who desperately want a child, but the months pass and still no baby. They gather their courage and travel into the forest to seek out the "Mother of the Owls" who lives deep in a cave and is feared by the locals.

The Mother of the Owls, an old crone/Mother Earth of types (even the stones are her children), wears a shawl of feathers under which many animals reside. She hears the couples plea and grants their wish, removing a feather from her shawl and telling them that they must hang it over the child's bed for protection. She tells them the child she will give them, a little girl, will be different from the other children and upon her 12th birthday, the Mother of the Owls will come for her. The couple agrees, promising to do as the Old Crone advises.

When they arrive home, there in the cradle, is a baby girl. They name her Gwinna and she grows just as the other children grow, with one exception...she has little nubs on her back which seem to be growing and growing into something more. The mother bounds her back with ribbons to hide the change and as Gwinna reaches the 12th year, her parents begin to panic and bury the feather of protection.

This part of the book is rather dark so some sensitive children might not do too well with it until they are older, though as children who have been exposed to age appropriate fairytales, reading it without too much emotion, my girls did fine with it (at age 7). Gwinna hears the owls and feels called to them one night as a band of them fly to claim her. Her mother and father and the house they live in grow very cold and turn to stone.

Gwinna wanders away and finds herself at the cave of the Mother of the Owls. She is welcomed and embraced as the crone removes her garments and unwinds the ribbons to reveal Gwinna's beautiful owl wings. She is nursed back to health and given fine new clothing and shoes. The tale continues with Gwinna developing a friendship with a little owl called Tobin and she learns to fly. She embraces the Mother of the Owls, whom she affectionately calls Grandmother.

I don't want to spoil too much of this fantastical tale, but it involves a journey to learn the song of the mountain, where Gwinna befriends a dedicated Griffin and a magical tree who gives her life to become a sacred harp that Gwinna had always yearned for. Only when Gwinna learns to let go of something she really loves, does she learn to play the harp - taught by the wind. With her song, she brings life back to her home, healing her mother and father from the stone curse and even restoring Grandmother to full health.

I wish I could play the harp or lyre as it would tie in so beautifully with this story. This book celebrates handwork through woodworking, as Gwinna and the Griffin (a master woodcarver who transforms into a grandfather figure) make the harp with their own hands. They take hair from grandfather's beard and Gwinna's hair to string it with and a fire transposes it into the magical harp it becomes.

This lovely book is probably best for ages 7 and up, maybe waiting until age 8 or 9 for more sensitive children. It involves the 4 elements, the seasons, Mother Nature and fantastical elements, like the Griffin and the beautiful talking tree.

We found this to be a very special book, worthy of a spot on our permanent bookshelf.
Posted by Jen at 11:36 AM