ES Block I: Element of Air 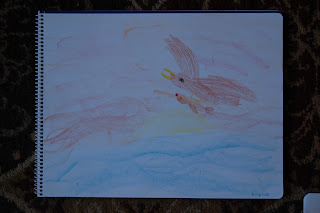 Air
We are the winds that weep and wail
Blow a breeze and swell the sail
And wear a cloak of wonder rare
Of silver, gold and stars that stare.
And joy we spin in every fold.
Our gift on earth for you to hold.
We are the winds that weep and wail
Blow a breeze and swell the sail.
My apologies for neglecting my blog this past week, but I've been working hard on other things as of late. I wanted to quickly pop on and share a little bit of what we did last week with our Environmental Studies block on the 4 Elements. Last week, we covered "air".
That was a bit challenging, but I continued the story of Sunshine the Harbor Seal, who by now was getting a bit bigger and able to venture into the ocean for longer periods of time as her amount of blubber increased. She was swimming in the sea with Walter the Walrus when they swam to a small island not far from the shore where Sunshine was born. Suddenly, out of nowhere, a huge eagle flew toward them and snatched little Sunshine from the shore, flying her over the ocean and toward the cliffs beyond. In a panic, Walter reared his ancient head and barked the loudest howl he could, which was heard by Sid the Seagull, who immediately took flight after Sunshine and the eagle... 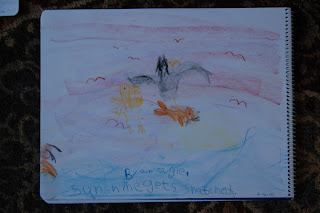 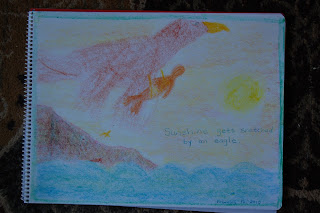 They flew over a sailing ship which was being pushed by the breeze of the wind and the onlookers pointed toward the strange site above them. They watched as a moment later, a scrawny seagull flew with all its might after the eagle and the baby seal...

In the middle of the week, we had a well check appointment with our pediatrician in Santa Monica, so we headed in the morning and met with our wonderful Dr. Jay (I forgot my camera so had to use my phone so sorry for the graininess)! 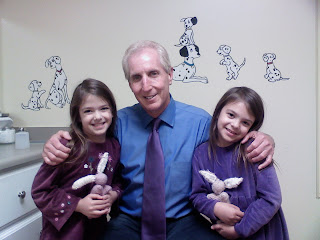 The girls took their favorite toys with them - Sadie and Lily the Rabbits made by Linda from Mamma4earth. I know I mention her often, but my girls really love her knitted animals! These two bunnies are getting to see the world...and drive in some cool wooden dump trucks! 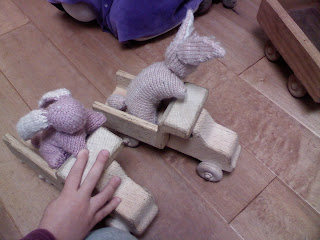 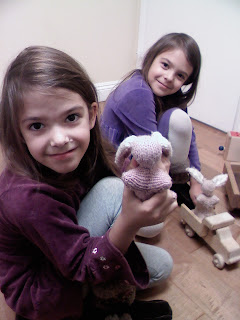 Then we drove down PCH to Malibu. They were filming something there so there was hardly any street parking, but the beach was relatively empty. The girls were excited to see some pelicans in the distance, chomping on fish and then gathering their large wings to skim the surface of the ocean once more. They also got a chance to watch various sandpipers (a few different species) and they attempted to get close to these odd birds, as they darted to and from the shoreline. 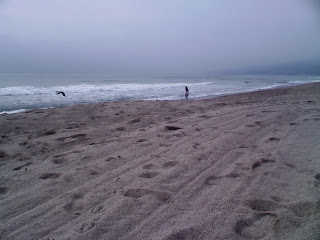 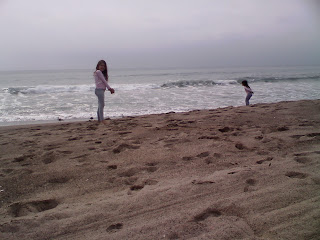 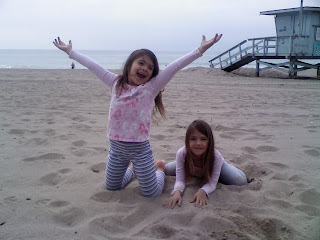 OK and not sure what's going on with this sexy pose here - especially from a girl who doesn't watch tv! They kept telling me in the doctor's office that they have no idea who "Hannah Montana" is, after hearing their almost 8 year old cousin talk of her! 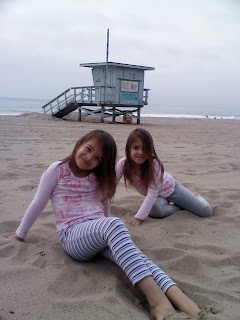 We visited our local nature center, which doesn't have any eagles, but has a beautiful red tailed hawk that they rescued and are rehabilitating. We were fortunate enough to see it hanging out with one of the handlers.

We talked a bit about the wind and watched it blow through the trees for a while and that was about it! This week, we are working on the last element and trying to wrap this block up. I really wished we had a kite for this section of the block as we had lots of wind last week and that would have been wonderful!