ES Block I: Element of Fire 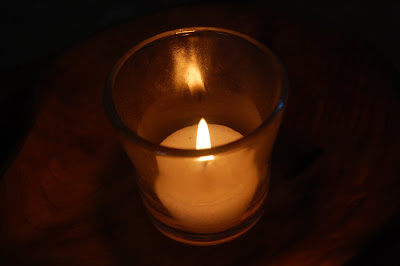 Fire
We, the bright red fiery flames
Crackle and roar, that nothing tames.
Sparks like shooting stars they fly
Helpers we are of sun on high.
With golden sword the cold we slay
And bring you warmth to cheer your stay.
We, the bright red fiery flames
Crackle and roar, that nothing tames.
We continued this week with our last element, that of fire. In the final installment of our story of "Sunshine the Harbor Seal", after Sunshine was whisked away into the air by an enormous eagle, they were chased vehemently by Sid the Seagull. Below them, in the water, Walter the Walrus swam as fast as he could, praying that Sid would be able to save Sunshine.
Sid flew faster than he ever had before in his life, as the eagle soared upwards, aiming for her nest in the cliffs of the mountains. Sunshine flew closer and closer to the sun, feeling its warmth. Her sides ached as the eagle's talons clutched her tightly and soon Sunshine realized that part of the warmth she was feeling was from her own wounds.
Suddenly, a small white object flashed before her eyes - it was Sid! He bravely knocked into the flying eagle who, startled and stunned, released her grip on the harbor seal and soon Sunshine felt herself falling, falling, falling down toward the ocean below. Luckily, Sunshine knew that when she dove into the water, she should do so face down and she shot straight into the ocean, leaving Sid tailing behind her.
Sunshine hit the ocean with a sharp thud and found herself sinking to the bottom of the sea, her wounded sides aching. She softly landed on the ocean floor, not too far from the shoreline, so she really wasn't all that deep. When the water settled, she was able to see that she was sitting directly in front of a beautiful shell, the likes of which she had never seen before. There were starfish attached to the rocky base and a funny looking scallop shot toward her and began to speak.

The scallop welcomed Sunshine and told her not to fear, that she had found the magic stone which had the power to heal her wounds. Sunshine knew this was the very magic stone that Walter had been searching for! She gazed forward and the shell slowly opened to reveal a gold sparkly jewel stone, which immediately shot forth a burst of warm, bright, healing light. She could feel the warmth of the light like a fire around her as her wounds tingled, burned and quickly healed. A moment later, Walter arrived on the scene and witnessed the end of the healing. The shell quickly shut tight and Walter swam to Sunshine, marveling at her healed body. They were so joyful to see each other again.
Walter told Sunshine that Sid was just fine and waiting for them on shore and the Scallop told both Water and Sunshine that the healing stone had to stay where it was, but could be used to heal animals who needed it.
The two swam back to Sid and Sandy the Sandpiper and they all lived happily ever after for many, many long years. The End.
The girls drew a picture in their Main Lesson Books centered around our story of Sunshine the Harbor Seal. We talked a little about friction and the heat of healing. 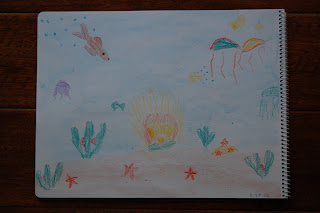 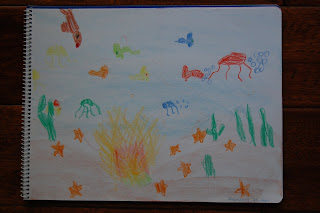 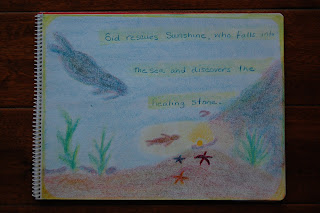 We acted out the story with our beeswax figures and the shells we had found on our trips to the ocean, along with a beautiful gem we purchased at Burminco Rocks and Minerals Shop in Monrovia, CA. 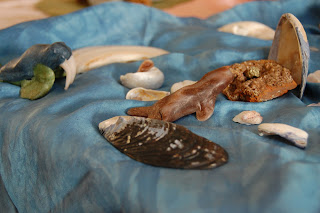 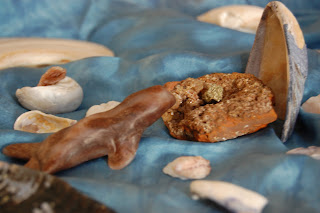 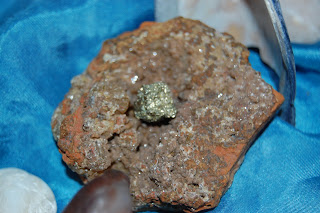 Using Dorothy Harrer's story, "The Rainbow" from her book "Verses and Poems and Stories to Tell", I told the girls the story of the Great King Sun and how he taught the Rain Fairies and the Sun Fairies how to work together to help the little Plant Children grow and how the first Rainbow emerged.
Another wonderful story to share is by the incredibly talented author, Christine Natale who wrote the St. Nicholas stories. She has an enchanting story called "The Return of the Sun King" which can be found at the bottom of this blog post here. It ties in beautifully with the fire element!
I will be back to wrap up the rest of this block, as we did a little bit more today on it. But for now, this encompasses most of our work this week on the element of fire. Lots of candles burning and some good snuggling around the fireplace during our evening reading sessions.
Posted by Jen at 2:56 PM