ES Block I: Element of Earth 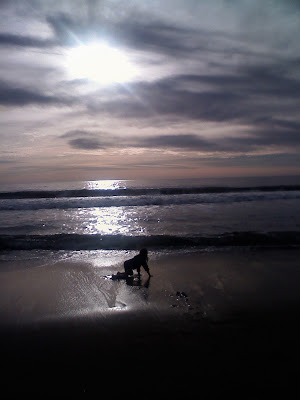 This picture embodies the Four Elements: Earth, Water, Air, Fire
In Eric Fairman's Path of Discovery, he discusses the two Main Lesson Blocks he did on Environmental Studies with his Grade 1 students. The first 4 week block focused on bringing an awareness to the children of the Four Elements with the intent of "bring(ing) to the children, in an imaginative manner, an appreciation of the beauty of the Earth which in turn would lead to an enriched experience of the world and so encourage wonder, joy, gentleness and reverence towards Creation in all its manifold diversity."
The beach, a lake, a river or stream, a pond or waterfall brings the four elements together as one - from whole to parts and this is where we began. 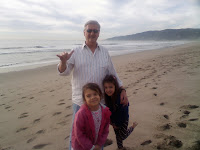 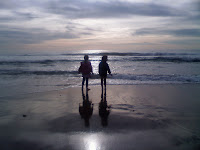 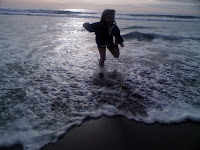 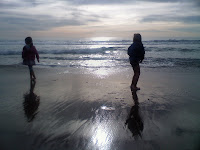 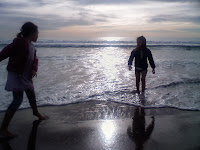 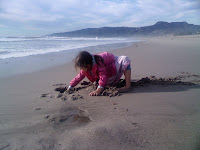 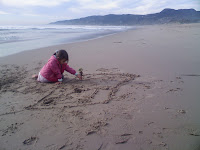 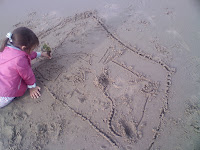 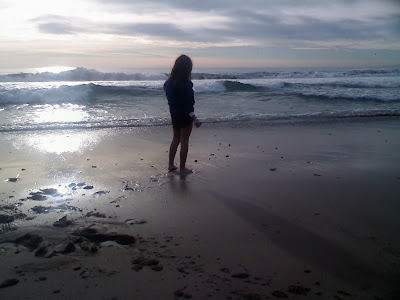 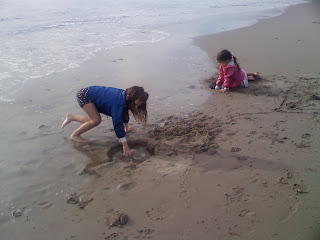 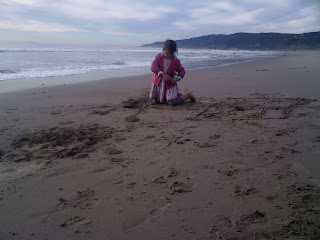 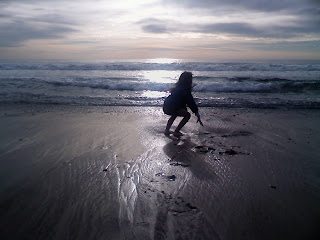 Treasures to be found... 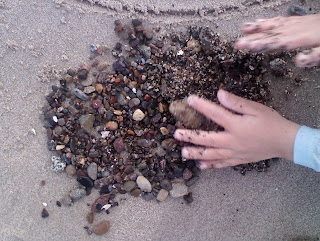 Earth
We, the stones on which you stand
Hold the waters and build the land.
In caves of darkest earth
Find we our crystal birth.
The sun with radiant light
Makes us sparkling bright
These are the gifts we hold for you
Of blood red, white, and blue.
To return again... 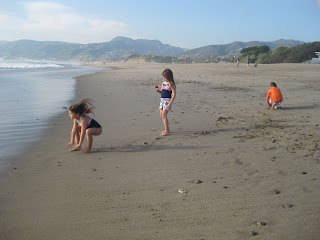 and find it changed... 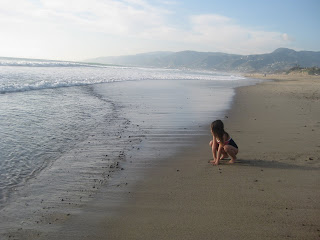 yet somehow still the same... 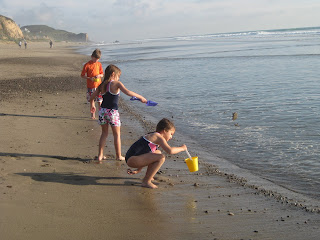 to joyfully reflect upon our Oneness once more... 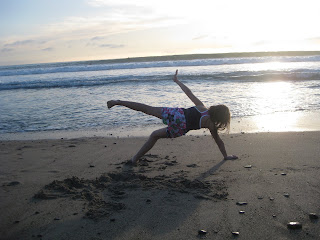 as we gaze out upon the shore...
So much of this block has been spent in silence, in play, in the senses. Yet when we return to our home and reflect upon it all, we begin to work with our words, with our hands and our will is strong.
Waldorf teacher Marsha Johnson, in her Grade 1 files, shares a wonderful summary of her 4 week *science* block - which we will call a Nature block (or Environmental Studies *ES*). Using her inspiration, we began ours using local flora and fauna to create this block.

I created a nature story which encompasses the four elements and local wildlife and an environment we frequent often. The first section of our story encompassed the Earth...The story began with a young harbor seal named Chloe who flopped along the sandy shores of a nearby beach in search of a sunny spot to birth her very first pup. When her baby arrived, Chloe marveled at how tiny and helpless her baby was. Inspired by the warm sun and her fair coloring, Chloe named her baby Sunshine. In the story, the girls hear bits about what Chloe eats in the sea, how she is surrounded by other seals yet they all keep a distance. As the quietest of the pinnipeds, mainly the sounds of other pups ring out in between the few minutes of nursing every few hours. Soon Chloe must return to the sea to fill her empty belly with fish, her favorite being herring and flounder.
Chloe asks a nearby Seagull, named Sid, to watch over her tiny pup and he happily obliges, hoping Chloe will reward him with a treat from the sea. The girls learn that when she dives into the sea, her ear flaps close and her eyes function well in murky water. They shout out, asking me how long she can stay under the water. The girls are interested. They understand that when Chloe can't see well, she uses her whiskers to sense food around her, etc, etc. All sorts of interesting and real information is being told through this story, yet it has heart as they imagine becoming Chloe on this adventure.
Meanwhile, on the beach, Sid and Sunshine develop a lovely friendship... 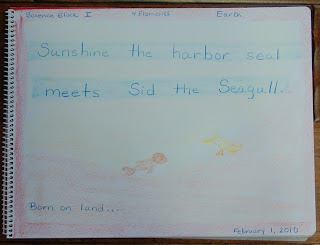 After the girls draw pictures of Sid and Sunshine, we get out our modeling beeswax and set to work, making characters for our story. They are set upon a seasonal table with silks and rocks found on our nature walks. 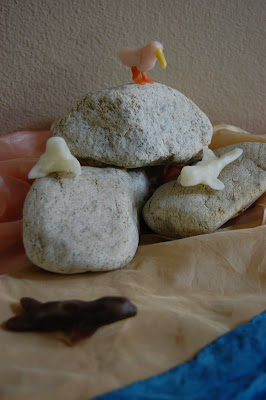 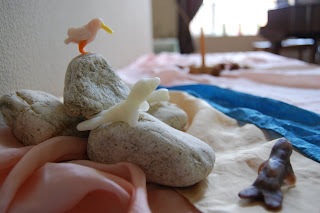 The next day, the first part of the story is retold with the girls help and we continue it. While Chloe is out to sea, a marvelous surprise thumps upon the beach. It is a giant and ancient bull walrus named Walter. At first Sid is alarmed as walrus' sometimes eat seals, but Walter assures them that his belly is full. He has been separated from his male herd and is in search of a magical sea shell that is reputed to be somewhere near this very shore which holds an enchanted singing stone which the water fairies placed in there during ancient times.
While Walter is telling Sunshine and Sid the story, a little sandpiper, named Sandy, zooms by with his little legs moving so quickly they can hardly be seen. Sandy rushes toward the receding coast line and plunges his beak deep into the sand, finding a luscious insect to gobble up. As the waves rush back in, Sandy rushes away from the water toward the large walrus.
Sandy tells Walter the Walrus that he couldn't help, but overhear the story, and that he just might be able to help him... 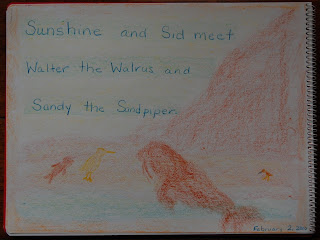 To the beeswax modeling figures, we added Walter the Bull Walrus and Sandy the Sandpiper. 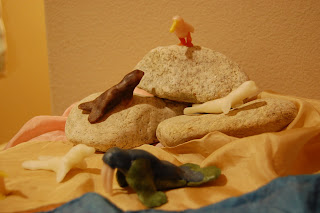 This morning, the girls retrieved their bag of ocean rocks that they had collected on our last visit. We rinsed them off, dried them carefully, remarked at their vast uniqueness and placed them upon a blue silk to admire their beauty. 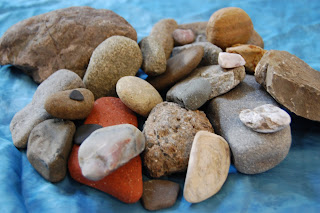 We retold our story thus far and I read to the girls Dorothy Harrer's poem, "The Four Elements" from Verses and Poems and Stories to Tell. I also read them the Earth verse listed at the beginning of this post.
I then read them the story of "The Lazy Gnome", also from Dorothy Harrer's book. It was about a lazy gnome who didn't like to work. He gets thrown out of the gnome kingdom (Earth Element) and soon is enchanted by the Sun Fairies, bringing sunbeams to help each flower bloom (Fire Element). They are so happy as they flit about and sing that he wants to join the fun. But he is told that he cannot. The Sun Fairies have much work to do...so he crosses a meadow and comes to a beautiful blue stream with a rocky ledge that tumbles down to a waterfall. He sees some Water Fairies (Water Element) laughing and tossing sprays of water-drops up into the air. Again, he asks to join in the fun, but they explain that they are busy working - not playing. Their job is to send water back up into the sky to make storm clouds to spread rain over the land to nourish the Plant Children. The lazy gnome moves on as night falls and he thinks about how these beings can have so much joy and fun while working. When darkness falls, he looks into the sky and sees bright, twinkling lights in the air. He spots a cloud of swift fairies flying like wind, carrying heaps of silver dust (Air Element). They are having such fun. He begs to join them, but they explain that they don't have time to play. They are carrying stardust to every part of the world, for without it, no one would wake up happy and gay.
In utter frustration, he stumbles along and falls into a hole, where he hears a joyous song being sung and the sound of pickaxes tapping against the earth. He hears the joy of the other gnomes hard at work, in laughter and song. He realizes that if they don't do their work underground, there would be nothing for the others to take care of. Before he knows it, he rushes forward, grabs a pickaxe, and joins in the song as he delights in making holes in the earth to bring air and water to the seeds underground. And never was he lazy again.
I then told the story of "Jack and the Beanstalk" from English Fairy Tales collected by Joseph Jacobs.
We then set out our sea rocks and earth onto the seasonal table as we build upon this block.

The story will continue tomorrow (day 4) and will encompass the Water Element...
Posted by Jen at 10:17 AM