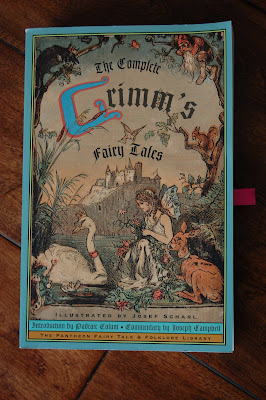 Who makes the World so Warm and Bright,

Dear Sun, Good Friend, for this we pray

Lead us and Guide us, in this New Day. ~Marsha Johnson (Waldorf Teacher)

Armed with my Grimm's Fairy Tales book, along with some incredibly valued resources (another post on this soon!)...we decided to *ease* into our first formal school year with a two week block on Form Drawing in preparation for all the beautiful drawings and letters we will be writing this year.

To be honest, I probably should have waited another week since we were coming off of a very busy summer with tons of fun times with visiting families and festive evenings with friends. The night before, we went to Tony's boss' house for an evening party and swim. Needless to say, we didn't get home until around 11pm and the girls were shot the next day...sigh...live and learn!

We gathered in the morning, which was a switch from our previous years when it worked best to let them free play all morning and do some activities in the afternoon when they were more settled and introspective.

We brought to the table Charley's beloved oak tree clipping with a flower on it, that has lasted forever (and no sign of fizzling out yet)! She was eager and ready, while her sister was tired and in no mood for structured activities...we lit a candle, said a prayer, said our verse, and I put some soft music on. The girls actually asked if they could get their backpacks, then ran upstairs and filled them with stuffed animals and miscellaneous items while I gently tried to bring them back to focus on our mission.

There has been so much talk between them and their friends & cousins who go to traditional schools about what happens in school that Charley proceeded to ask me if I could "pretend" to be the teacher, so when she continued to ask me another question, I made her raise her hand and wait to be called on! LOL! She then proceeded to ask me if we could get Elena & her each a cubby to put their backpacks in! They really have no idea what it would be like to go away to school, but I think in their minds, it must have some pretty awesome bonuses, like a *real* teacher, having to raise your hand and getting your own special cubby to store your stuff in! ;-P

Our first lesson in Form Drawing consisted of the straight line. Elena was hiding under the table at this point (don't ask...) but Charley and I stood as tall and as straight as we could. It's really harder than it looks to stand even with your elbows not the slightest bit bent. We then proceeded to go outside to find straight shapes in nature...

When we came back inside, Charley & I walked the straight line of a jump rope. After exclaiming this was "way too easy"...I jazzed it up and had her close her eyes and walk it forward...then close her eyes and walk it backwards. THAT was really difficult. I could hardly do it myself, but we had fun! Following that, we got out our sandscapes and she drew straight lines with her stick and on her own, lined up some new acorns we had collected over the weekend to form a straight line in her sand.

She really felt the straightness...so I proceeded to read the girls "The Water Nixie" by the Brother's Grimm. In the story, two children fall down a well and are captured by a Water Nixie who holds them captive and has them do all sorts of ill-fated chores for her (chopping down a tree with a blunt axe, filling a bucket that has a hole in it, etc)...when the Nixie is off at church, the children escape and she pursues them. They drop a comb and a brush, which springs forth thorns for her to climb over and they eventually get away. There are many opportunities in this story to practice straight (and curved) lines...(we used a white board while waiting for our chalk board to arrive...)

After the girls practiced the forms on the whiteboard, they wrote them in their Main Lesson Books, first with block crayons and then with stick crayons. I allowed them the freedom of expression to design it as they wished, with the only rule being that they avoid using the black and white crayons (white because it won't show on this paper).

Tuesday proceeded much like Monday did, with the exception being that we focused on curved lines instead of straight. Luckily, Elena was in a much better mood and participated in walking...er....crawling the form.

We photographed one of our roses to represent the curved lines in nature, but also noticed them in rocks and pebbles and the man-made curve of our concrete patio, a hummingbird's nest, and the outer shapes of the leaves.

One fun activity we tried was having the girls attempt to draw curved lines with their toes! It was very hard, but we had quite a few laughs :)

They then moved onto their MLB's to record their curved forms.

Wednesday (both straight and curved lines):

Wednesday went much more smoothly as we got into the routine of what we were doing and the girls had fun combining the straight and curved lines. They really enjoy the whiteboard & got into the Water Nixie story.

And at last! Our blackboard arrived (Paper Scissors Stone) for $18.50 (plus shipping)! And I tried my hand at capturing "The Water-Nixie" story in chalk. The girls LOVED it :) 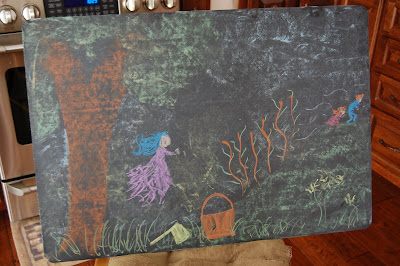 This was our first three days of form drawing with "The Water-Nixie" story by the Brother's Grimm. Can you spot the many straight and curved lines in the chalkboard drawing?