Easing Back into Schooling...Form Drawing to Maths 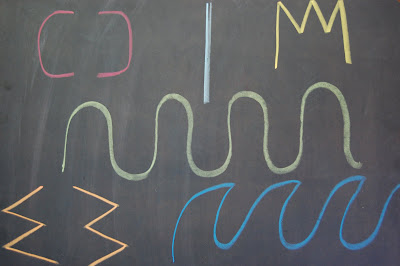 After focusing on the holiday season for the month of December, we began to ease back into homeschooling last week by reviewing some familiar forms. I drew the reviewed forms on the large board, one at a time and then the girls wrote them on their boards after drawing them in the air with their fingers. We started to have so much fun telling stories about each form that they began to transform the forms themselves. We also drew some of them on the windows with our wax crayons.

The first running form I introduced was the parapet form, which of course, ended up being transformed into a castle with a brief retelling of the Brothers Grimm's Rapunzel. They walked the form outside and we drew a picture around the form on the board. 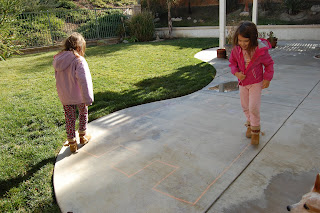 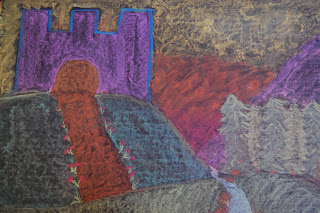 This segued into our first Maths Block this morning, which is on the Qualities of Numbers. After a brief circle time, we began with a bit of yoga and focused on oneness with this most appropriate Standing Pose (Urdhva Hastasana).

I pulled a riddle from Melisa Nielsen's "A Journey Through Waldorf Math" for the girls to guess which number we would be doing:

I live in the sky
Up far away
I brighten the earth
I bring light to our days
And each night when the day is done
You will be sure, I am the only one.
Who am I?
I got one guess for "Heaven" and one guess for "Sun" which was quickly changed to "Moon" on the last line - think they got confused at the mention of night bringing the moon out - but yes, the answer is Sun.

We then switched over to the wonderfully put together "Sixth Sense & Holistic Math" ebook by Earthschooling's Kristie Burns. She discusses incorporating the learning into the senses to make it whole body learning and not just mental math. We tried to find as many things as we could that encompass "Oneness" - the earth, the sun, each of us individually - both inside the house and out. We discussed the unity of one - one tree with many branches and one forest made up of many trees, etc.

The girls looked at the chalkboard drawing with the castle and discovered the "oneness" in it - one castle, one path, one door, one forest, one stream, one purple mountain, one sunset, etc.

We discussed the "rhythm of one" with verses, emphasizing each syllable and then I told them "The Grain of Corn" - A Tale from India, as listed in Kristie's book.
We then went outside with our new extra long jump rope and the girls began by jumping over frontwards and backwards while reciting a verse from Eric Fairman's "Path of Discovery Volume I: Grade 1" -

When I was One
I had just begun.

When I was Two
I was nearly new.

When I was Three,
I was hardly me.
When I was Four,
I was not much more.
When I was Five,
I was just alive.
But now I'm Six,
I'm as clever as clever.
So I think I'll stay Six for EVER and EVER!
And we ended the day with a suggestion by the Master Waldorf Teacher, Marsha Johnson with Shining Star: "What is One?"
The girls will sleep on it and tomorrow, we'll hear what their "One" is. And we'll begin to weave the tale that formally begins our first Maths Block as we delve deep into the Quality of Numbers.
Posted by Jen at 3:13 PM