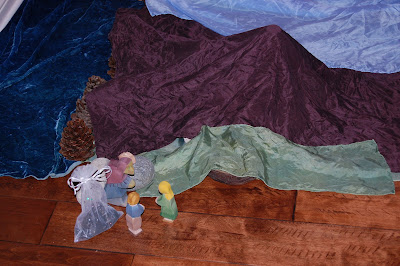 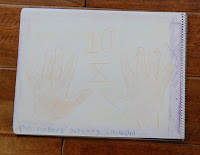 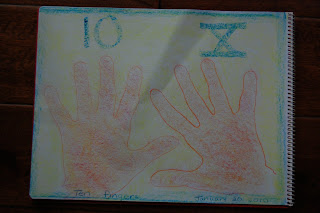 This morning, we covered the last number - 10! Along with the usual riddle, story, sand scape uncovering, jumping, etc we talked about a crab having 10 legs and what deci means and tried to think of words representative of the number 10. Kristie Burns' "Sixth Sense Math" book had a wonderful story of an antelope who outsmarted the king by counting by twos to reach the number ten quickly. The girls were in a hurry to finish this lesson as they couldn't wait to plug in the secret code to see what lay beyond the magic cave. So we headed over to our set up and the Old Crone continued her story with the children. Using my beautiful Syrendell silks, I covered everything until the code was correctly entered. Now that they had learned the secret symbols, it was time to plug them in. 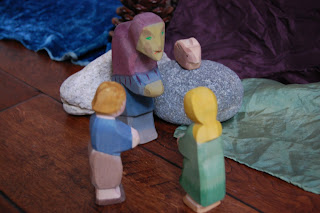 We used an adorable bag made by Linda at Mamma 4 Earth that she sent our little Henry the Hedgehogs in and placed our rune stones that I had made inside the bag. The stone idea was inspired by Our Little Nature Nest who made them for her math basket. I used a paint pen and wrote the numbers from 1-10 on one set of black stones (available at craft shops) and then wrote the Roman numerals I - X on another set of black stones. The girls would then match them up after they learned each number. They were now ready to match all 10 to open the cave on their journey to find their way back home. 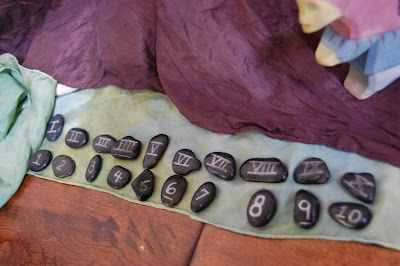 And voila! With a groaning croak and a rumble like thunder, the cave wall shook and opened to reveal... 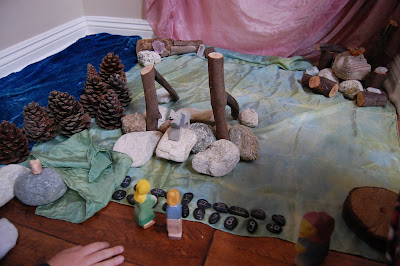 The Land of Numeria...
Guided by an ancient talking wolf, the children walked through the entrance of the cave and set foot in the Land of Numeria. The wolf would protect them on their journey. They were told that there were magical beings in this land that would show them all about mining and gems and how they collect and divvy them up for their King. If the children looked hard, they might just see a few gems lying around and when the time was right, they would meet the magical beings who would help them collect some special stones that they needed to get back home. They were not to forget the magical symbols that they had just learned for those would be needed along their journey, as well... 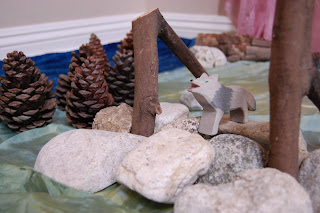 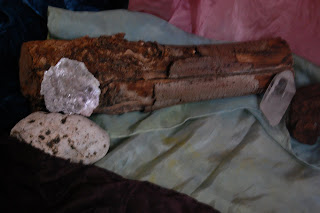 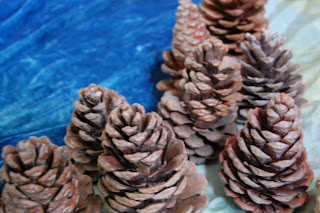 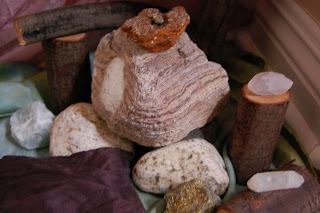 And this concludes our official first maths block on the Quality of Numbers : I - X. The rest of the week, we'll be reading and telling stories in review of the numbers to finish up this 3 week block. I also hope to blog a nice summary with our findings after experiencing this most fun block! Of course, this story will continue in our second maths block - can't wait!
Posted by Jen at 11:36 AM