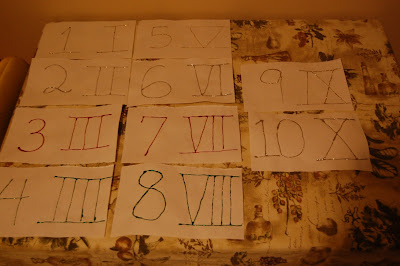 Miss One and Two,
Jump Three and Four,
Turn around swiftly
And sit upon the floor.
Clap One and Two,
Nod Three and Four,
Jump up again quickly
And be ready for more!
Thus began our first Maths Block: Quality of Numbers. I pulled from some amazing sources and slept on it for a time before we started maths:
~ Eric Fairman's "Path of Discovery"
~Kristie Burns' Earthschooling "Sixth Sense & Holistic Math: Using the Six Senses & Whole Body to Learn Math" ebook
~Marsha Johnson's "The Quality of Numbers" file in her Yahoo Group
~Barbara Dewey's "Mathematics for Waldorf Homeschoolers Grades 1-3"
~A Little Garden Flower's "A Journey Through Waldorf Math"
The night before we started, I took some paper and some glitter glues that we had in our crafting basket and I drew out the Arabic and Roman numerals from 1 - 10 (see picture above). The glitter goes beautifully with the story we are working with and we have gold, silver, rubies, and emeralds alternating in our numbers...

Then, I created a story inspired by Eric Fairman and Marsha Johnson with some tweaking to make it our own. I set up the scene on our table and covered sections with a blue silk that I would pull back as the characters moved further and further along.
It began with a young boy and girl who were romping through the lush evergreen forest one day when they spotted a frisky little hare. They decided to follow him. Every few feet the little hare stopped and turned to them, as if he was waiting for the children to follow. 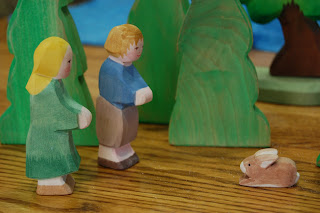 They went deeper and deeper into the forest when they came upon a single oak tree in an endless forest of pines. How unusual, they thought. They watched as the hare nestled close to the trunk of the beautiful old oak tree when it suddenly seemed to disappear! 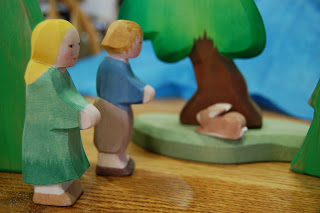 The children couldn't believe their eyes and went closer to the oak to inspect it. 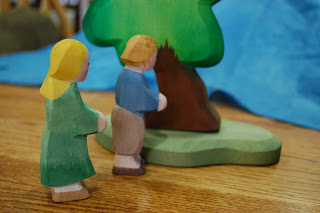 The little boy noticed some beautiful carvings in the trunk of the oak and ran his fingers over them. He was startled when he pushed against the bark and a hole opened abruptly. The little boy fell head first into the tree and the girl had no choice but to jump in after him.

They tumbled down into the darkness. And when they finally landed, they were in a mysterious land they had never seen before. There were strange boulders and rocks and a forest of brown pine cones. The children were a little unsure, until they spotted their friend, the little hare, who was sitting on a rock, waiting for them. 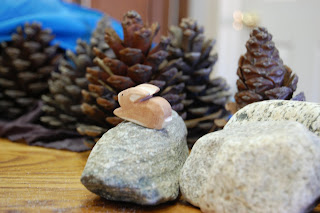 Boy were they glad to see him! 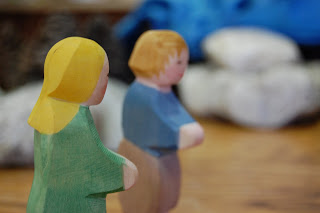 They approached and the hare continued to lead them through this strange and mysterious land. 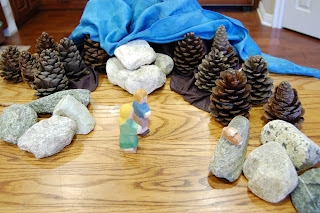 The hare climbed up a mountain. The children were not far behind. 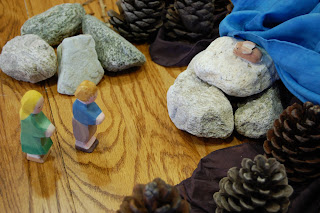 When they neared the top, they could no longer see the rabbit. But the view was breathtaking. 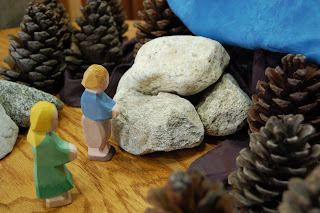 When they finally reached the summit, they saw two green glowing eyes in the face of the mountain and out stepped an Old Crone. 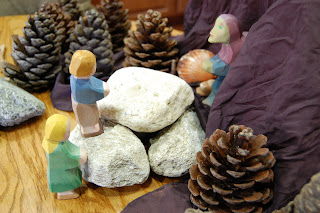 She had been expecting the children. Beside her was the hare and a beautiful sea shell. The children were lost and wanted to find their way home. The Old Crone told them that the only way back to their home was through the cave behind her. However, the door to the cavern was sealed shut and no amount of pushing could open it.

The children began to cry. The Old Crone hushed them and told them a secret. If they could but learn the forgotten magic symbols to open the door of the cave, it would lead to a marvelous land where they would find their way home. The children were eager to learn and thus began the riddles... 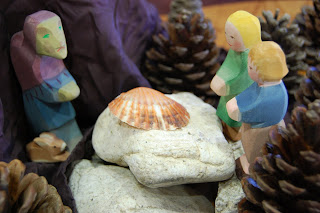 As straight as a spear I stand,
To reach for the sky with both my hands.
My shape reveals how many "I am".
~ The Upright Human Being
At this point, I got out the magical sandscape where I had placed our first number sheet and covered it with sand.

The girls each got some nature gifts (a stick, some seashells, etc) and began to move the sand to reveal their first symbol.

When they saw it, they oohed with glee and then wrote the symbols in their own sandscapes. We discussed "What is One?" and decided to draw a picture of the sun in our Main Lesson Books. While they were drawing, I read to them the stories from Earthschoolings "Sixth Sense & Holistic Math" ebook. I have found Kristie's guide to be indispensable for our Maths Block. She offers so many ways to incorporate it into the senses and really has brought to the table the absorption of math into the whole child, rather than just a concrete understanding of each number. We are seeing math and numbers in everything now! 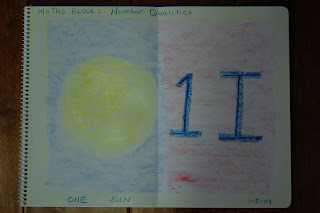 At the end of the lesson, I asked them the next riddle:
For me and you, we each have two
It's not our feet or hands to eat.
Our legs are strong, but that too is wrong.
Our arms are bold, but this we can not hold.
With these you see with so much glee...
What am I?
~the eyes/number II
I asked them to think about "What is Two?" They slept on it and that concluded the day.
We continued this way for the rest of the week into this week and here are some shots of II, III, and IIII.

After the girls hear more of the story with the crone, they get a new riddle to solve. I use the ones in "A Journey to Waldorf Math" at the end of our lesson time for the number we will do the following day. I end the lesson with the question of "What is ___?". After they sleep on it, we discuss their ideas and find things outside and around the house representing that number. When the Crone appears to tell more of the story, she offers a riddle from Eric Fairman's "Path of Discovery Volume One: Grade One" and once it is solved, the girls brush off the sand to reveal the next magic symbol...
Alone I cannot feel myself,
But with the one I can feel the other,
You have them both, but
What am I and what is my sign?
~ Our Two Hands 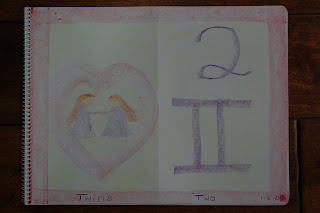 Charley was so proud of her Kings...she loved their colors... 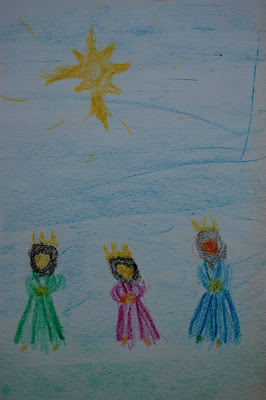 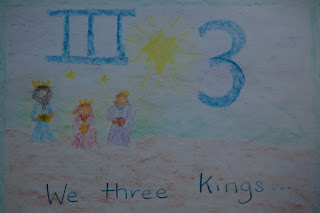 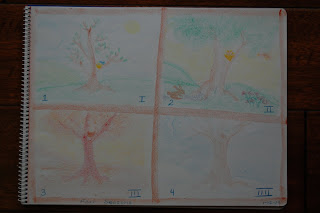 They are first learning to write Roman Numeral four with the "four legs" that Steiner recommended, but we will also learn the symbol that was used by the Romans more often since writing four I's just seemed too time consuming :D
They received the next riddle today:
If you counted us all you would have ten
From your hands we do extend
On one hand you have just five
Like worms who know that they're ALIVE!
Who are we?
(~Five Fingers and V)
I also need to note here that this block has been so much fun. After the first day, Charley said to me, "I thought we were going to do math today!" That was all the validation I needed to know we were doing something right!
Posted by Jen at 3:22 PM