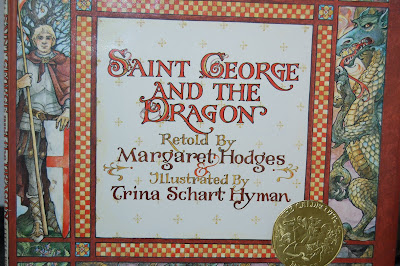 Happy St. George's Day!
Today, we celebrate this Patron Saint of many countries (including: England, Palestine, Portugal, Germany, and Greece). I did an extensive post about him last year (more historically based), including a mini-tutorial on how we needle-felted a whimsical dragon. It can be found here. There is a lot online to be found about this amazing man. Here is one example.
As a relatively new tradition, we love to celebrate this day by reading this enchanting book by Margaret Hodges called "Saint George and the Dragon". It is actually a retelling of a section of Spencer's "The Faerie Queen" in which St. George follows Princess Una on a quest to slay the dragon who is terrorizing the countryside. There are fantastical illustrations by Trina Schart Hyman which will certainly fuel the imagination for a time when Knights and Dragons ruled the land.

The book begins as thus:

"In the days when monsters and giants and fairy folk lived in England, a noble knight was riding across a plain. He wore heavy armor and carried and ancient silver shield marked with a red cross..."

The Queen of the Fairies sends the Red Cross Knight to slay the angry dragon and the book begins with St. George riding his horse, along with Una on her white donkey, followed by a white lamb and a dwarf carrying food. Una has sought out this champion through the dangerous land on her journey to find such a knight. After many days of travel, they reach a hillside where an old hermit resides. The hermit tells the Knight,

"It is time for me to tell you that you were not born of fairy folk, but of English earth. The fairies stole you away as a baby while you slept in your cradle. They hid you in a farmer's field, where a plowman found you. He called you George, which means 'Plow the Earth' and 'Fight the Good Fight'. For you were born to be England's friend and patron saint, Saint George of Merry England."

The Red Cross Knight and Una depart the next day toward the countryside where the dragon resides. The onlookers cheer on their champion. Suddenly, a hideous roar is heard and the Knight prepares for battle.

George and the dragon fight three times and the first two times, George is almost defeated. He is given strength and healing from an ancient silver spring after the first battle, healing dew from an apple tree after the second battle, and then, at long last, the faithful knight slays the horrible dragon once and for all.

There is a great celebration throughout the land. The King, Una's father, rewards the brave knight with riches. George tells the king to never forget the poor people and he gives his newly gifted riches to the poor, himself. Una and George are wed, yet George never forgets his promise to the Fairy Queen and goes off to fight for 6 more years, before returning to Una and his kingdom that the King has promised. And at last, he earns his name: 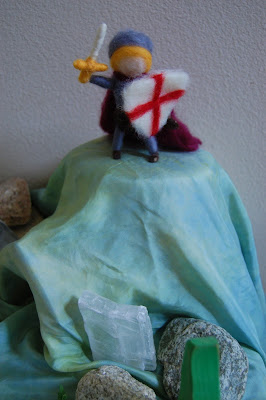 This book is a fairly long read at 32 pages and is quite descriptive. It is marked as a book for ages 4-8 on amazon, but I would say age 6+ would be able to sit longer for it, unless it was divided into several days. Some 6 year olds might not yet be ready as it is very detailed.

This book would be a wonderful retelling for a parent in their own words, for a younger child, especially with puppets and props.

Overall, this is a nice fantastical book for your bookshelf that will grow with your children. Even as an adult, I love looking at the pictures and imagining the world this illustrator has captured.

Until next time, Happy St. George's Day to Merry Old England and to us all!