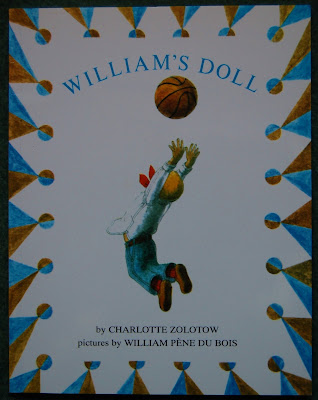 This is "William's Doll by Chalotte Zolotow. It was written in 1972 during a time when boys were to be only boys and to give such a lad a doll would surely lead to softening, which was utterly undesirable. This book beautifully shows the importance of little boys owning and loving dolls.

Ironically, my own husband was given a baby doll by his mom when his little sister was born in 1972. When Grandpa saw that doll, he threw it out - declaring it inappropriate for a boy to have a doll! If only Tony's mom gave him a copy of this book...

The story of "William's Doll" begins with this illustration and these opening words: 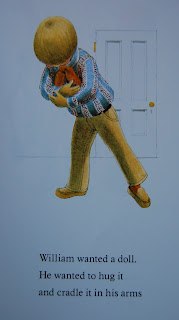 William is obsessed with having his own doll to love. He watches a neighborhood girl dote on her doll and wishes for one he could call his very own.

However, his brother and the neighborhood boys make fun of him and call him a "creep" and a "sissy". His dad gets him a basketball instead.

William plays with the basketball and gets quite good at it, but he still wishes for the doll. So his father gets him an electric train instead. And William has fun with it, but it still doesn't stop his desire to have a doll and just isn't the same thing, no matter how William tries to make it so. 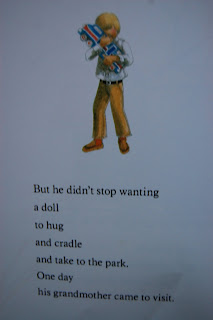 One day, Grandmother comes to visit. 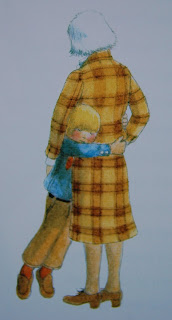 And William shows her how well he can play basketball and shoot the ball through the hoop. He shows her his train and they watch it together. And then they go for a walk. On the walk, he reveals to her that what he really wanted was a doll. He tells Grandmother that the kids make fun of him and his dad doesn't want him to get one.

She takes him right to the store and he picks out a beautiful doll with long eyelashes and a long white dress with a bonnet. William absolutely loves it. 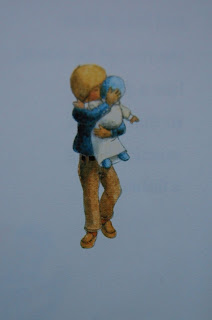 When his father sees it, he gets upset. Grandmother wisely tells him that William needs it...
"to hug and to cradle and to take to the park so that when he's a father like you, he'll know how to take care of his baby and feed him and love him and bring him the things he wants, like a doll so that he can practice being a father."
Well said, Grandmother! I cry every time I read this book...

I had taken this book out from the library when my girls were just four years old. I read it to them and when it was finished, Elena quietly took it from me, thumbed through the pages, pretending to read it and then tucked it in her arms as she laid down on her pillow and went to sleep. She loved this book so much that she slept with it every night until we had to return it to the library. Of course, I promptly bought a copy to give to her with an inscription that recounted this story and the intention so that when she's a mommy someday, she can read it to her baby...

I really love "William's Doll" and I think it has a really important place on the bookshelves of many families. I find it very Waldorfy, as it clearly follows the need that waldorf education recognizes that little boys need dolls to love, too. There is no gender separation with waldorf toys.

The one thing I do need to mention is that if you are reading to a young child, you might want to change the words "creep" and "sissy" or maybe even omit that part. Or not read it at all to boys who are not *aware* of the misconception that boys *shouldn't* play with dolls, until (if and when) they are suddenly bombarded with that. BUT if you have a son who has been on the receiving end of being made fun of or told that only girls play with dolls, then this book is a must read. Perhaps it is a must read to all parents (especially dads who have issues with boys having dolls). In any case, we cherish this book for the powerful message it holds - the recognition of the importance of imitation and how very natural it is to learn to nurture and love this way. I remember playing with my dolls, even when I was much older, and probably considered *too old* to do so; yet, holding my dolls in my arms and loving them, dreaming of the day when I'd be a real mommy - and I feel that that started me on the road to attachment parenting. I really believe that. :D

So give "William's Doll" a read through and maybe it will find a special place on your family bookshelf, as well!
Posted by Jen at 6:05 PM