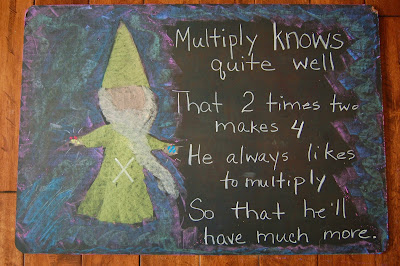 My apologies for the delay in our academic blog posting. We've had a lot going on as of late and perhaps the close of this Grade 1 year is approaching too fast.

Our final process was Gnome Times, the multiplying gnome. I didn't take many pictures for this particular week, but here is the main ending to the story.

At this point, we had met Gnome Share, Gnome Plus, and Gnome Minus Takeaway. 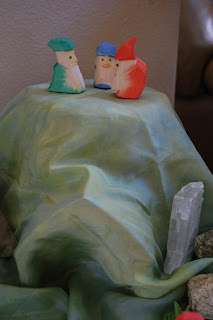 We also met a Shepherd Boy who was searching for his lost flock, which Gnome Minus Takeaway had accidentally lost. The Ancient Wolf called up the help of the wonderful herding collie and he led the children to a part of the Land of Numeria that they had not yet encountered. 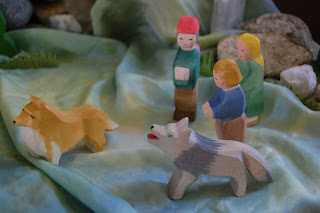 It was covered in a white snow...from under the blanket of snow, a jolly yellow gnome appeared and offered to help. He introduced himself as Gnome Times and the Ancient Wolf explained to Lucy & Phineas that Gnome Times was always helping Gnome Plus count the loads of gems that come up from the mines. Gnome Plus just can't count that fast and Gnome Times is able to count them much quicker! 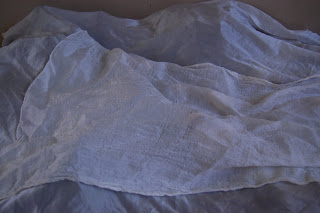 The shepherd boy explained that Gnome Minus Takeaway had lost his sheep. "No worries," said Gnome Times! And the girls watches as the top white silk was removed, revealing the flock of sheep! The white snow camouflaged them!

The shepherd boy was astonished because he originally had 4 sheep, but under the careful watch of Gnome Times, they multiplied and now there were two new baby lambs among them. He now had 6 sheep!
The next day, Gnome Times revealed his sign to the girls and we practiced writing it in various ways. We used the gems to illustrate multiplication and had fun jumping our 2's, 5's, and 10's over sticks and the jump rope. 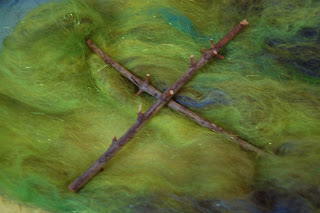 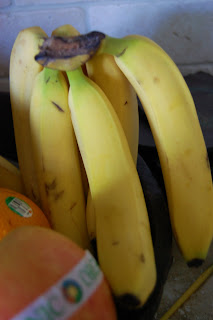 When the story continued, Phineas and Lucy were thrilled to have found the lost sheep, but then were saddened by the fact that they, themselves, were lost. The shepherd boy took them to his grandfather, who was thrilled at the return of his grandson and flock. The collie decided to stay on and help them manage their growing numbers. 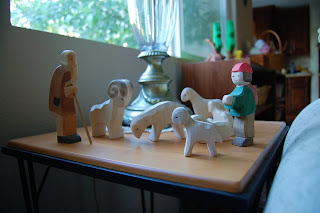 Grandfather heard the tale of the children (which my girls recounted to him) and he instructed them to return to the grassy mountain where they first met Gnome Share. That cave had a magical door which would take them back to their home, if they could present the correct symbols. 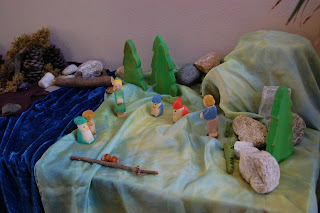 Using the twigs and the acorns, the girls had to set up each process (plus sign, divide sign, subtract sign, and multiplication sign). And then the Arabic and Roman numeral stones were once again brought out and placed in order and matched up. 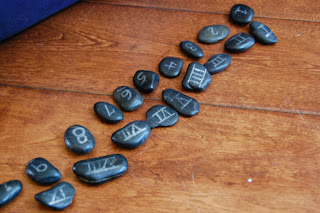 With a groaning croak, the door to the mine slowly opened and the children gave hugs to each of the wonderful gnomes they had met on their adventure. When they went to hug the Ancient Wolf, they were saddened at the thought of not seeing him ever again. He dried their tears, telling them that now that they knew the magic signs, that they could return any time they wished. 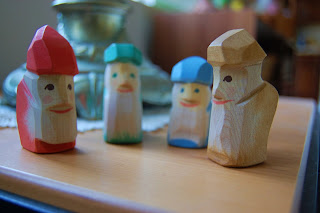 With a final farewell, the children entered the dark cavern and disappeared only to return to their own land, where they rushed into their parents awaiting arms! 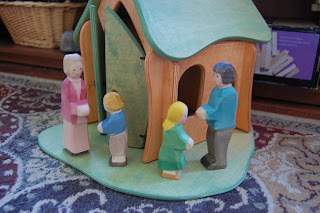