This past week, we continued with our four week Maths Block on the Four Processes and Quantities of Numbers. Here is a summary of some of what we did this week.

We began with an introduction to three new characters in our story. The first two arrived together when the children heard an old, quiet grumbling coming their way. They could barely make out the words, sounding like an apology. 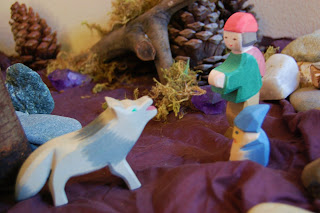 And then a second voice was heard, that of a young boy.

"Don't worry. We'll find them. We've just got to!"
Gnome Share turned to the children and said,
"Why that sounds like Gnome Minus Takeaway! He's always losing things. It sounds like he needs our help."
They approached the two new characters and introduced themselves. We learned that the Shepherd Boy had been watching his grandfather's flock of sheep in the meadow when he ran into the sweet and loving Gnome Minus Takeaway. Gnome M.T. loves animals and was smitten by the sheep and asked to play with them. He had forgotten that he was supposed to be collecting gems for the Gnome King and got swept away in the excitement of looking after the sheep. The Shepherd Boy happily agreed to let Gnome M.T. play with them while he ate his lunch and before long, the silly Gnome M.T. lost track of the entire flock. And the two were looking in earnest.
Luckily the Ancient Wolf, the guide and protector, knew just whom to call upon. He gave a great, thunderous howl and moments later, help arrived! 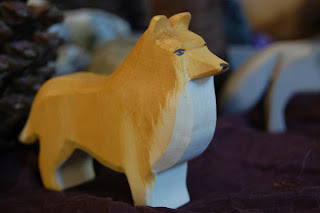 "This is Kaimi, the Seeker. He will track down your flock,"
said the Ancient Wolf. 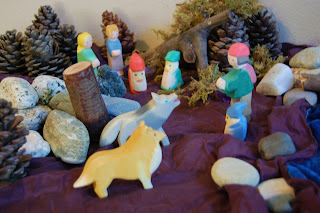 And this is how the girls were introduced to the subtraction gnome. I wanted to find a way to weave animals into our tale since the girls just love them :D
I got out their baskets and gave them each seven blue gems.


We headed outside with our gems and some silk scarves to blindfold the girls. I think I got this idea from Marsha Johnson, but the girls pretended to be Gnome Minus Takeaway and dropped some of the gems until I said, "Stop!" and then they felt in the basket how many were left and how many they each had to find to make 7 again. They then had to find the missing gems on the ground, using their feet :D and pick them up again.

After this, we brought the story back and rotated with a game of hide and seek. One person would hide all 14 gems and the two seekers (like Kaimi) would find 7 gems for each basket.

Here's Elena, waiting for Charley to finish hiding the gems. While we were waiting, we discovered lots of snails crawling through our yard and on our fence.

The girls were introduced to the sign of Minus Takeaway Gnome and we wrote it with sidewalk chalk and had fun again with the sandscapes.

We ate some blueberries to celebrate Gnome Minus Takeaway's color. We looked for blue everywhere.

We did lots of work in our Main Lesson Book. I had found a lovely blog post about the Four Processes from Littlest Birds blog and liked how she altered Dorothy Harrer's original math gnomes poem for Gnome Minus from the word "careless" to "silly" because as we all, young children included big time, lose things from time to time and I didn't want to focus on negative labels. Be sure to check out the gorgeous presentation she did for the Quality of Numbers introduction - very inspiring! It can be seen here.
Here is some of our MLB work from the past week. 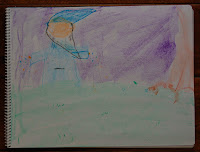 Charley's work above...with some problems with stories taken from Ron Jarman's "Teaching Mathematics in Rudolf Steiner Schools". I made up stories about each problem and the girls embellished with drawings of the animals. They also need more practice writing numbers as we write them backwards every so often. 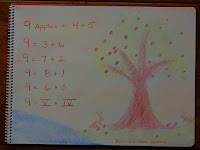 My MLB's - with the first one finally finished from our previous week's lesson.

Elena's work.
Something else we got out this week was a game I mentioned to another Momma recently that we enjoy. It's call Sum Swamp and this game would be very easy to make on your own with your child. We swap out the plastic characters with some Ostheimers and use the wooden dice I made with my wood burning tool so they could continue practicing their Roman and Arabic numerals (the dice are available at my shop for those who don't have time to make their own). We also have the glass gems available for them to use, but I can see they are starting to need to use them less and less already.

Sum Swamp also helps identify odd and even numbers, higher and lower numbers (as you are to always place the highest die rolled first, with the process next, then the 2nd number die to find your total).

Finally, the number stories we read this week are:
Seven: "The Seven Ravens" by Bros. Grimm
Eight: "How Stories Came to Earth" ~ An Ashanti Legend about Anansi the spider.
Nine: A retelling in my own words of the "2nd labor of Hercules", when he subdues the hydra with nine heads. You can see summaries of Hercules here. Otherwise, if you haven't told "The Gnome" yet by the Bros. Grimm, it is about a 9 headed dragon. We used it in a previous block.
This coming week, we meet the final gnome and wrap up this block!

And here is Pee Wee! Getting bigger and doing well thus far!
Posted by Jen at 8:15 AM